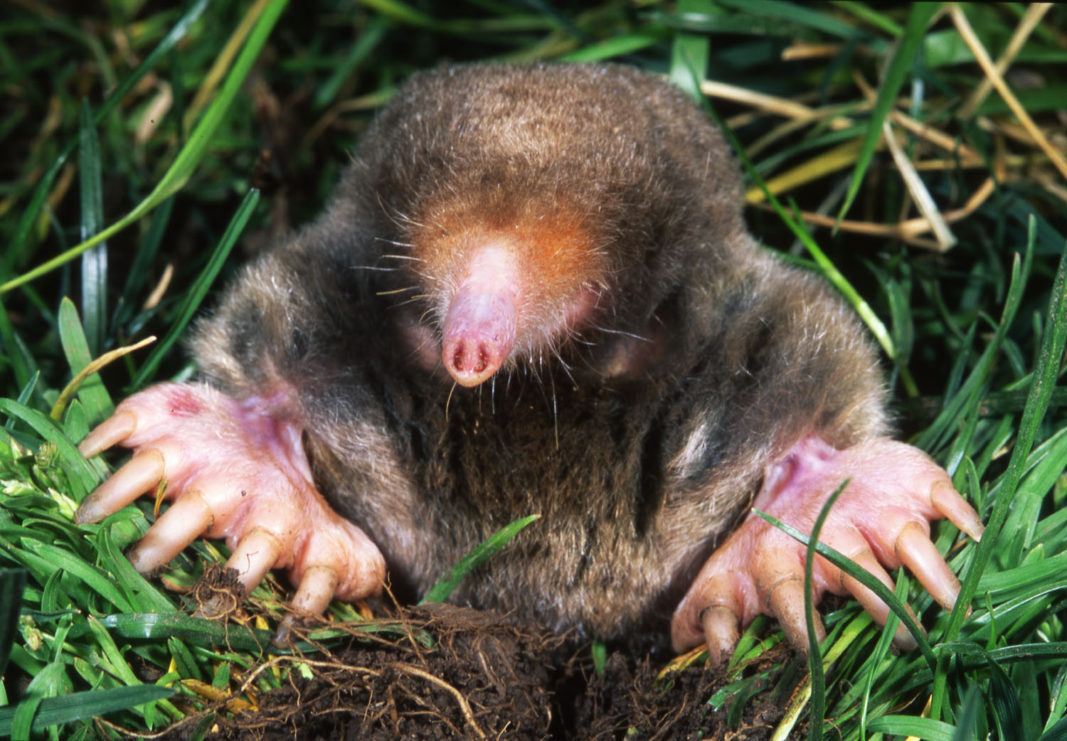 A long, long time ago, in a yard not far enough away, the grass grew green and lush; worms and grubs lived in peace. Life was good for many a moon.
Then I bought the property. The forces of darkness marshaled their forces. And Mole Wars began. “Oh, Obi Wan, where are you?”
Worms and grubs were eaten alive unmercifully. There was no peace.

This past weekend was dry, the sun shone and the wind was gentle. And, even though it was World Naked Gardening Day on Saturday, I only walked bare-footed in the yard. My once lush green grass was crisscrossed with yellow, the only reason I knew the moles were back! (In my mind’s ear I can hear grubs and worms screaming for help.)
Mole Wars has lasted too long. Battle-fatigued, my mind turned to song to keep my spirits up. Back in 1962 Elvis Presley starred in a movie called Girls, Girls, Girls!, with a title song of the same name. I started humming it. For those who don’t know the lyrics, here’s how the original starts (if you want to watch it, click here):

Girls, goin’ swimming,
Girls, in bikinis,
A walkin’ and wigglin’ by, yay, yay, yay
Girls, on the beaches,
Girls, oh, what a peaches,
So pretty, Lord I could cry
I’m just a red blooded boy
And I can’t stop thinkin’ about
Girls . . .

It has been nearly 16 years of my war with moles. And, as I stomped on the tunnels on Saturday, I started to change the words to Girls, Girls, Girls!

Thing is, I thought I had won the war 13 springs ago. Back then I brought in a hired gun to protect Casa D’Rush and before long the blind desperadoes were bushwhacked, dry-gulched, trapped, hung out to dry — kilt dead.

Just like in the movie Jaws, I needed to find me a Captain Quint. Somebody colorful, somebody who knew funny songs about bow-legged women, and had a way with the Queen’s English that would make her blush. I needed a man who wasn’t afraid to get dirty. In an effort to mashup as many movies into one column as possible, I shone the Mole-light up into the dark night sky to find a hero who could rid my yard of evil. The Dark Knight of Moles was Dave Kugler. He knew their habits. He knew their patterns. He knew how to get rid of ‘em. Oh, and he was tenacious. Unlike Quint, he didn’t get eaten by what he’d chased. The moles had no hope.
For only too brief of time the worms and grubs were free to roam the space a few inches below the greening grasslands of Casa D’Rush. Discouraging words were seldom heard. Then the worms turned. The warm, gentle breezes of peace turned icy cold.
The blind furies returned with a vengence!
(Just so my neighbors know, I have not suffered some mentally debilitating injury. I am not insane. I was not in some macabre-like trance, dancing to a beat only I could hear this past Saturday. I was merely taking the war back to the moles. I was saving the worms and the grubs, smashing tunnels, pounding the dreaded Scalopus Aquaticus back to whence they came. Merely prepping my yard for spring cleanup.)

In the movie Caddy Shack, grounds keeper and exterminator extraordinaire Bill Murray said you had to know your enemy to vanquish him. In the last two decades, I have learned plenty of my enemy, the SA.
Moles, besides living in dirt, are solitary varmints. They continue tunneling and eating and hookup with other moles in the winter, have babies in May and then go on their way, by themselves, tunneling and eating. (In that respect, I like to think of them as the great white sharks of the dirt world.) Come to think about it, them thar moles is just as dangerous as them thar’ great whites with their lifeless eyes, black eyes, like dolls’ eyes. (Click here to see Quint’s speech about shark eyes.)

Recently, I contacted my Captain Quint, my Dark Knight of Moles for help again. Dave, who owns and operates Critter Catchers, Inc., I am sad to report, only works on bats and mice these days. I am again alone with the moles.
Mole Wars, the saga continues. (Note to readers: If I come up missing one of these days, look in my yard, or better yet, under it. It may mean the moles won.)
Comments for the Mole Hunter can be emailed to: DontRushDon@gmail.com