‘I thought it had truly been vandalized’

By Shelby Stewart
Staff Writer
Groveland Twp.- A spring clean up at a local cemetery has drawn the ire of some family members. 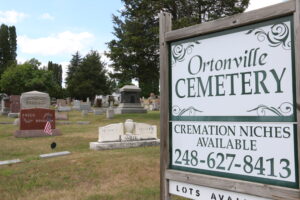 On Monday night, the Ortonville Cemetery Board hosted a meeting open to the public. Several residents at the meeting spoke about the Spring Clean-up that left some graves bare, which upset many families that have loved ones buried at the cemetery.

“I have been greatly concerned over what has went on in this cemetery since just prior to Easter. I came up here Easter Sunday, and it looked like the whole park had been vandalized,” said Susan Gibbons, who has both her parents and her husband buried at the cemetery. “Things were uprooted, gone, the place was a mess. I started to call the police because when I first went to my husband’s grave, I thought it had truly been vandalized. And then I started looking around, and I wasn’t the only one. And then I thought, this was purposefully done. And indeed it was.”
On April 1, the annual spring cleanup was conducted, and many families found that plants, borders, and small tokens on the graves had been taken out. The cemetery board states this was in accordance with the rule that there is a maximum of two feet for the headstone and planting. If a headstone is 6 inches thick, that would leave 18 inches in front of it for flowers.
“I thank you all for voicing your concerns,” said Laurie Dallape, cemetery board president. “Cleanup is every April 1. I’m not saying anybody removed anything, and I’m not saying they did not. I’ve been here my whole life, I’ve been on the board for 20 years. So, my heart breaks. I cannot say if a worker took it, I cannot say if someone in the cemetery took it. There was a police report done, they came out, they looked, and they deemed it as normal.”
The Citizen did reach out to the Michigan State Police Metro North Post in Oak Park, which covers Oakland County. They were unable to locate the report for the cemetery by press time on Thursday. The Citizen will update if a report if found.
“There was a sign that said spring cleanup, okay, my dad’s been here for 45 years, I’ve been through that many spring cleanups, and it’s never been a mass destruction of things, like this was,” said Gibbons. “I’m not caring about the monetary value, you can’t replace what it did to my heart to realize what the destruction was to my husband’s grave. You can’t compensate me, all the money in the world couldn’t compensate me, for what I’ve lost. Because every time I dug a piece of dirt up here was a healing of my heart, because I was doing that for my husband. And I just think it’s a travesty that you guys allowed this to take place.”
For rules and regulations for the cemetery, visit ortonvillecemetery.com