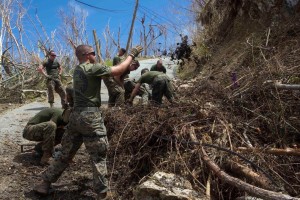 Editor
It’s been about a month since Hurricane Irma first hit the Caribbean. According to news reports at least 37 people were killed there by the storm—including one person from the small village of Cruz Bay located on the eastern shore of St. John.
“It’s a war zone,” said Jennifer Montgomery, a 2001 Goodrich graduate and a resident of the Cruz Bay for the past 10 years who rode out the powerful hurricane on the island. “The hurricane peeled bark off the trees and changed the landscape not to mention. We need help down there.”
Montgomery was no stranger to dangerous storms. As a former resident of Florida she rode out five hurricanes when she lived there about 10 years ago.
Montgomery moved to Cape Coral, Fla. with her boyfriend following graduation from high school.
“The economy in Florida tanked in 2007,” she said. “So when my boyfriend had a construction job offer in Cruz Bay we packed up and moved down there. No doubt it was real jump to move to the Caribbean and I was nervous but we took the chance—it paid off. I found work at the time in a variety of shops and started cleaning homes.”
Montgomery’s home cleaning business included some multi-million dollar homes.
“Some of the homes near Cruz Bay rented for $30,000 per week,” she said. “I had plenty of business and hired other workers to help me just to keep up.”
Montgomery was living a dream, plenty of good paying work and living on an island in the Caribbean.
“I was the Cinderella of the Caribbean,” she laughed.
“Sometime in late September we were notified that Hurricane Irma was on the way,” she said.

“We had plenty of time to prepare for the storm. Keep in mind there’s no place on the island that’s very far from the ocean, it’s only about 19 miles around.”
Cruz Bay, with a population of 2,743 is the main town on the island of Saint John in the U.S. Virgin Islands.
“Still there was really no way out,” she said. “The major goal was getting tourists out of the hotels in only a few days. The flights were for tourist to get back to the mainland. Cruise ships were coming into port to take people out before the hurricane hit. We are all local, it’s our home where we live so we stay.”
Montgomery lived in a two bedroom home in Cruz Bay.
“I’d seen all this before,” she said. “We nailed everything down and started gathering up as much fresh water as we could, filling everything that we could find. Stocking up on food and gas we were ready. So we thought. Honestly the waiting for the storm was the worst part.”
Montgomery, with six friends and pets, decided to leave her home and moved to a larger vacation home.
“I did not want to stay alone,” she said. “So we all hunkered down in a home with a bunker and hurricane shutters. We all figured this would be a lot safer then my small place in the city.”
No so much, said Montgomery.
“The storm started slow, very slow,” she said. “Then picked up in intensity. We had a wind gauge that went up to 200 m.p.h.. It got there then broke. The ‘hurricane’ shutters on the house blew off with in the first hour. Then the glass in the windows shattered and went ever where. Rain water starting coming into the home, so we all went to the bunker for about three hours. It was hot down there and very loud. It sounded like a freight train with someone beating on the house with a baseball bat.”
The island of St. John was decimated and would be Irma’s worst destruction on American soil, according to news sources.
Irma hit the Virgin Islands as a Category 5 hurricane with 150 m.p.h. winds. The storm changed the 20-square mile landscape of the island—winds stripped the foliage off trees.
“After the storm we came out and started cleaning up,” she said. “We helped others as much as we could.”
Montgomery returned to her home in the city of Cruz Bay.
“My house was untouched,” she said. “The shutters stayed on it’s a very solid house with cement poured walls. I could have stayed there and been fine.”
Within days news of Hurricane Irma a second storm was aimed at the Virgin Islands. The one-two punch of Hurricane Irma and Hurricane Maria about 14 days later was enough Montgomery.
“I had a plane ticket to come home,” she said. “There was no power on the island to work, no water and with another storm coming it was time to go. Hurricane Maria really had nothing left to destroy.”
Since the airport was destroyed in St. Johns she boarded a evacuation boat and covered the 80 miles of ocean to Puerto Rico. She flew home eariler this month.
Montgomery returned to her family home in Hadley.
“They are making progress in the islands,” she said. “But it’s very slow. They are trying to make things normal, but there’s no schools and no tourists. That’s all we have down there to support our economy. We need help to rebuild and right now it’s pretty scaring. The military came and rescued people while many people have offered food and water. Country music artists Kenny Chesney and Alan Jackson both made big donations to help. When need help to rebuild, I can’t go back until I and others have jobs there.”