‘It’s quite the anomaly’

By David Fleet
Editor
On Wednesday morning Dustin Scriven had a little bit of home in his front yard.
The Ortonville native, now living in College Station Texas, about 100 miles north of Houston, was in the eye of a winter storm that, according to the 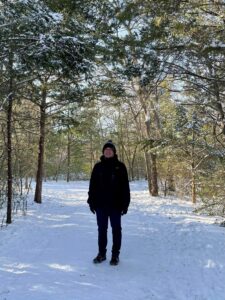 Associated Press, delivered hardship to parts of Texas, Arkansas and the Lower Mississippi Valley before moving to the Northeast on Thursday.
“This is my fourth year here,” said Scriven, a 2011 Brandon High School graduate and Texas A&M student.
“The weather we got was similar to a Michigan winter snow.

We received about 6 inches and the temperature has been between 7 and 30 degrees. It’s very unusual for it to be this cold, most winters it just gets into the 40s.”
Nearly 3.4 million utility customers around the U.S. were still without power Wednesday in the aftermath of the winter storm that overwhelmed power grids unprepared for climate change, and another blast of snow and ice threatened to impede the efforts to restore service.
“The snow is beautiful, but they don’t have infrastructure for it,” he said.
More than 100 million people live in areas covered by some type of winter weather warning, watch or advisory, the weather service, according to the AP.
“Power generation stations are not able to get their fuels because of road conditions in addition to downed power lines and over use of electricity,” he said. “In my area they are doing rolling outages. My neighborhood gets electricity for about one hour and then it’s off for several hours.”
They also turned off the city water yesterday because of a water main break not far from us, said Scriven, who earned a Bachelor of Science in astrophysics from Michigan State University and is currently working on a doctorate degree in physics.
“Many people were out enjoying the snow since the university was closed, even online classes were canceled,” he said. “It’s quite the anomaly. We saw a lot of people sliding their cars around in parking lots, and also many trucks using tow straps to pull friends behind them on sleds, trash can lids, laundry baskets, or anything they would find.”
The forecast says it will be nearly 70 degrees by the end of the coming weekend, he said.