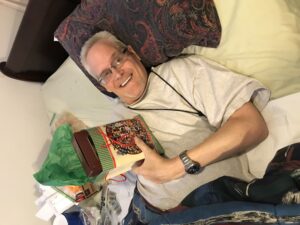 Mr. Stetler was born in Detroit, MI. Jeffrey graduated with a Bachelor of Arts degree from Central Michigan University and was in the graphic design field for many years in Michigan and Maryland.  Jeffrey enjoyed life despite his many medical issues and challenges.  His personality overflowed with loving others and making them laugh. He was an avid keno player and had the happiest personality ever. He was a great son and brother. We will miss him very much and he will always be in our hearts. As a friend appropriately said:

“God will take care of you, sweetie.”

Jeffrey was preceded in death by his father Paul E. Stetler.

He is survived by his mother, Doreen C. Stetler; brothers Paul J. and Eric; sister-in-law Marietta: and nephew Richard A. Perillo.  A memorial service will be held will be held at a later time.