Ringeisen, Joseph F. of Ortonville, Michigan passed away peacefully at home surrounded by his loving children on May 18, 2022. He was 93 years young. 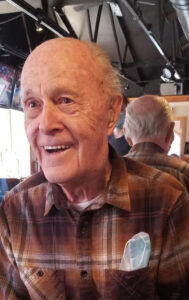 Joseph was born March 24, 1929 in Detroit, Michigan to the late Thomas and Mary (nee: Ott) Ringeisen who immigrated from Hungary as children. As a child, he grew up surrounded by his grandparents, many loving aunts, uncles, cousins and neighbors growing up in the Detroit, Wyandotte and Grosse Ille areas. He loved playing baseball, working on cars, tinkering on engines, riding motorcycles and building anything from boats, to garages to pole barns. After graduating high school in 1947, he began working at Michigan Bell Telephone Company, where he would work as a switchman for the next 41 years. He began his early years in the downtown Detroit offices of Trinity, Temple and Bethune buildings. He later transferred to Lincoln Park, then later to the Bridgeport office in 1974 where he would retire from in 1988. He enjoyed all his time at Ma Bell and made many friends there over the years. Joseph served in the United States Army in Japan during the Korean War. He was assigned to the Signal Corp and was proud to keep the lines of communication open in the basement of the Dai-Ichi Insurance building located near the Imperial Palace so that General Ridgway could communicate with the men on the front lines in Korea. In 1965 Joseph married the love of his life Geraldine H. Pelowski-Karr, a widow with 3 young children, who he met years earlier at Michigan Bell in downtown Detroit. They remained happily married for 46 years, until her death in 2011. Upon moving to Ortonville over 20 years ago, he enjoyed working on his property, cruising the lake in his pontoon and going to the Edna Burton Senior Center where he had many special friends who he enjoyed playing cards with. After the passing of his wife, Joseph continued to take adventures with his children to Australia, Arizona, California, Colorado and Milwaukee, and stayed active. He loved telling jokes to the people he’d meet and enjoyed sharing stories of his past. He will be missed by many friends and family members he has known over his long life. Joseph is survived by two sons, Leonard (Rosario) Karr and Kenneth Karr; one daughter, Jennifer Karr; five grandchildren, Mallory Karr, Kassia (Benjamin Armitage) Karr, Kyle Karr, Christopher (Claire) Bongiovanni and Jacob (Jane) Bongiovanni; five great grandchildren, Annie, Isabella, Daniel, Alexa and August; one sister, Christine (Ron) Verda. Also survived by many nieces, nephews and cousins. He was preceded in death by his wife, Geraldine Pelowski-Karr and his sister and brother-in-law, Theresa and George Minn. A Celebration of Life will be hosted by his children at 2pm on Saturday, June 11 at 145 Huff Lake Ct, Ortonville, MI 48462. Arrangements were entrusted to VILLAGE FUNERAL HOME 135 South Street, Ortonville, Michigan. To send a condolence to the family please visit www.villagefh.com