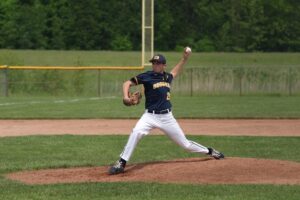 to a 5-0 no-hitter on May 3.
“Noah had the Linden hitters on their heals all night long,” said Bob Forback, Martian head coach. “The great thing about this years team is they learn fast. I tell them things once and they focus and remember. High school baseball is a short season so teams that pick things up quick do well.”
In the sixth inning GHS Cole Scribner had the play of the game to save the no hitter. On a ball hit to right field that would have been a hit 99 percent of the time Cole knew the situation and aggressively charged the ball and threw the runner out at first base to preserve the no-hitter. Noah went on to shut them down in the seventh. Keller, Scribner, Nick, Belanger and Brayden Raether each had hits for Goodrich. Raether had two RBIs along with Nick, Scribner and Keller each getting one RBI each.
As of May 5, Goodrich is 12-1 and 10-0 in the Flint Metro League.