‘Know that you did your best and move forward’

By Shelby Stewart
Staff Writer
A 1998 Goodrich High School graduate is the first openly gay journalist to win the Michigan Emmy for News Anchor, and he’s hoping his story can 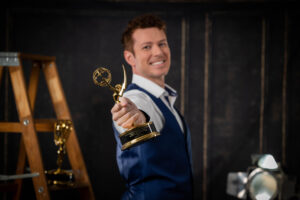 empower young individuals to be true to themselves and be a positive role model.
“I always tell people, and I think it was a quote from Joan Rivers, that it doesn’t get better, you get better,” said David Custer, the weeknight news anchor for WNEM in the Flint/Bay City/Saginaw area.
After graduating from Goodrich, Custer went on to the University of Michigan to study biology, but then worked a day on the job with his cousin, who was a reporter at the time and loved it.
Since then, he has worked 20 years in the industry, and has been the lead news anchor at WNEM since 2016. Though, throughout his career, he hasn’t always been open about his sexuality.
“I came out in college, I think maybe in 1999,” he said. “I think when I first started out in my career, it was an ‘if you ask me’ type situation. I didn’t have pictures on my desk of a significant other or anything. It wasn’t until I came to Flint and worked at the Fox station, I worked with such a good group of people that became friends outside of work, I decided I would be completely authentic in my work. Everyone treated it as if I was anybody else.”
While the colleagues he had at the time were accepting, not everyone throughout his career has had the same response.
“Flash forward to years later, to the world of social media, people could be very critical,” said Custer. “I had one gentleman suggest I stop shopping for all my ties at the gay store. I had a woman who called the news room and accused me of killing my co-worker, who had recently passed away, by sneezing on him and giving him aids. I’ve had several people who say they love watching me on TV, but don’t support my lifestyle.”
The best way Custer deals with the viewer backlash is to not read the comments and not respond, which is also the advice he usually gives to others in the industry.
“Know that you did your best and move forward,” he said. “There are these forums online, even for people in the industry, and there was a time I was sitting here in my family room, and I was reading these forums just sobbing, and I didn’t understand why I was getting this hate, and it had nothing to do with the work that I was doing, it was just because I was gay. My now-husband said from this day forward, he made me promise to never read those again.”

While Custer has had some people criticize him for his sexuality, he has had just as many people who reached out to thank him.
“There have actually been several moms who reached out to me who thought their sons were gay and asking what they should do,” he said. “And I carry this letter with me that I got from a gentleman in 2017 that said he had contemplated suicide and didn’t feel he could make anything of his life, but seeing a successful gay man on TV saved his life.”
Since then, the man came out, recovered, and went back to school for culinary arts.
“It’s actually really overwhelming to have,” he said. “When I feel like I don’t want to keep doing what I’m going, I pull out that letter and that’s the push I need to keep going.”
In addition to the letter, the things that keep Custer going are his husband, Dan Buccilli, and the stories he gets to tell as a reporter.
“At first I was weary of doing any stories on LGBTQ topics because I didn’t want to be accused of being biased, but now I’ve reached a point where I feel it’s a human right,” he said. “So I aim to tell both sides of that story and any story.”
Custer talked about one story he did on a young transgender woman that was struggling with homelessness and has been kicked out by her family.
“I really wanted to show this story to highlight the struggle that people don’t even realize they might be facing,” he said. “I think it was important to use my platform for her story.”
In addition to his reporting, Custer has also been active in the LGBTQ+ community, and likes the direction it’s going.
“Over the years, I’ve watched that community grow,” he said. “I was at the first television station to have a booth at the Flint Pride Festival. Everything was growing and then the pandemic hit, but every year it’s just gotten bigger and bigger.”
He also said he’s seeing more allies attending the events, or people who aren’t part of the LGBTQ+ community, but want to support them.
“Pride is more to have everyone accept and celebrate this community,” he said.
Custer has also received awards for his activism in the LGBTQ+ community.
“I feel like when I was in my 20s I was working so hard to climb the ladder and be the best,” he said. “But receiving the Ruby Award and the Champion of Pride Award, they were awards recognizing me as an individual and what I’ve done for my community. Those moments that I reflect on make me feel good and proud.”
Currently, Custer just got married in December after being engaged for five years to his husband Buccilli. The couple has two pugs.
“He’s just incredible and works so hard and inspires me every day,” said Custer. “I helped him open a salon in Flint in 2019 with less than 10 people on staff, and now has nearly 30 staff members.”
Custer plans to keep doing what he’s doing to inspire young people, as well as tell stories that reach people.
“Another Emmy I won along with that one was two sisters that spent every day sitting outside the window at their nursing home where their grandma was dying of COVID, rain or shine,” he said. “And the night before the story aired, she ended up passing away, and I remember when I had to say that GG, the grandmother, had died I started breaking down on camera because that could be anyone’s grandma.”
Recently, Custer also worked with Goodrich High School to redesign the logo for the CARES Club and donated a flag, stickers and t-shirts to the organization to get the word out and show support.
“You get better, you become more understanding of the hatred and where it’s coming from, and that makes you a better person,” he said. “And hang in there, and surround yourself with people that love you. Because there will be people that love you for who you are.”