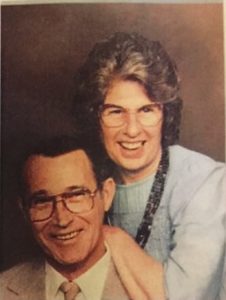 Lee was born in Lenoir, NC on March 9, 1931 to Robert and Ardna (Stanley)Phillips. Her siblings Ruth, Mae, J.C., Gay, Herman, Ray and Hazel have already gone. Lee moved to Michigan in 1953 but she never forgot the mountains. She returned to her home there often with her husband Dean Beasley whom she married in 1950. They were one month shy of their sixtieth anniversary when he died in 2010.

They had three children and are survived by them all: Barb (Bill) Bouck, Bea(Gary) Ellis, Bev (Dan) Mitchell. She was blessed with eight grandchildren and made each of them feel like the most important person in the world.They are Rhonda (John) Hagerman, Joel Bouck, Brandon (Tiffany) Ellis,Joshua (Heather) Ellis, Zech (Sara) Ellis, Cooper (Holly) Ellis, Sarah (Joe)Glover and Hannah Mitchell. She loved each of her thirteen great grandchildren and was ‘tickled to death’ to see a fifth generation when her great–great–grandson was born.

Lee loved working with the children at her church and served there in many ways over the years. She was compassionate to the sick and defenseless everywhere. She played piano in her great southern style with a bass line that rolled like thunder. She played guitar and banjo too. Showering her family with crocheted gifts was her hobby along with entering her projects into the county fair where she won many ribbons.