By David Fleet
Editor
Martina Ferri is thankful for the yard behind her home. 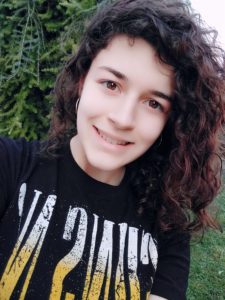 “We first had the news of the COVID virus on Feb. 21,” said Martina via the WhatsApp. “They soon started closing schools and my college. It all happened so fast. We are lucky here with my family, we have a backyard to go walk around. We can walk around outside. Many others in this county must stay in apartments and can’t go anywhere outside.”
Martina is a 19 year old college student, living in Ostiglia a commune in the Province of Mantua, Italy in the region Lombardy. The small suburb in northern Italy, has a population of 6,600 and is about 135 miles east of Milan.
On Wednesday, Reuters News reported the coronavirus death toll in Italy had increased by 475, the highest number so far recorded any country in a single day, according to the latest figures from the Civil Protection Agency. In total the death toll from the virus in the country, the worst affected in Europe by the outbreak, had reached 2,978 – an increase of 19 percent.
From March 12 until April 3, people throughout Italy are being asked to stay indoors and venture outside only for the bare essentials.

In 2017 Martina arrived in the United States and was an exchange student at Davison High School, during that time she joined the Goodrich Girl Scout Troop 31.
“I’m also a scout here in Italy, so I thought it was interesting to see the differences between scouts in Italy and scouts in America,” she said. “I came to the U.S. because I wanted to know more about the culture, the life-styles and also the school system that you have there that is very different for ours. I did not choose Michigan, rather my American family chose me based on a description I made. Still, I think I couldn’t have been more lucky.”
She returned to Italy in the summer of 2018 and now lives with her family in a Ostiglia home. Martina is also a first year student at the University of Brescia where she studies medicine. On Tuesday The Citizen contacted Martina, who like many now world-wide are under mandatory quarantine.
Martina’s father Stefano works in an area bank, where he came into contact with a worker with the coronavirus.
“He has not tested positive with the virus,” she said. “Still we must stay inside.”
Martina’s mother Stefania is a teacher and sister Sara is also a college student—they all are at home. Stefania communicates via the internet with her students.
“The number of cases of the virus went up a lot in just one week,” said Martina. “They are testing people that have the symptoms. It’s pretty tough here, you can’t go jogging, no concerts. You can’t go visit friends—we all live in the red zone.”
The entire country of Italy has been placed on lockdown in an attempt to stop the spread of the COVID-19 disease, impacting 60 million people.
“Yes you can go to grocery stores but food is very limited,” she said. “We are actually low on noodles—that’s very important for Italians. Italy ran out of noodles in general. If you still want to trade noodles for toilet paper I’m down for it. I think the greatest need here in Italy, besides noodles of course, is hygenizer (hand sanitizer).”
According to news sources residents can leave but it must be for an urgent, demonstrable or work-related reason.
“It’s a ‘situations of need,’ for example to buy food and other basic necessities,” she said. “I had seven friends that got together and went outside. The police caught and charged them. You need authorization to go out. Police can check that and they do.”
Martina said, a reason to go outside is authorized for health reasons for instance an urgent doctor’s appointment. Police can stop anyone at train stations, on roads or simply on the street – including pedestrians – and ask them to justify why they are outside.
While leaving their home is a challenge—medical conditions are worse.
“The biggest problem are the hospital conditions,” she said. “The availability (of beds) is tough.”
Martina said that hotels are being converted for patients. They are also calling doctors from retirement and students from medical school to work.
“Here in Italy we usually say that preventing is better than curing and in this situation it is very important,” she said. “The virus already spread here but I think that America is still on time to prevent that to happen so please be all careful.”