By David Fleet
Editor
The priceless family memories of three wars, spanning more than a century are safe today thanks to the efforts of area firefighters. 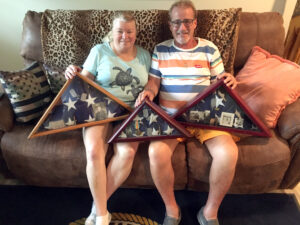 On Easter Sunday 2017 Rick and Cindi Metzoian were attending services at nearby Brandon Community Church of the Nazarene.
“I did not have my cell phone with me so my neighbor across the street drove up to the church and said, ‘Hey Rick your house is on fire,” said Metzoian. “So we raced home and the fire was out and the Brandon Firefighters were still on scene. We walked through the house and just cried.”
The fire was contained to the upstairs area of the home but smoke had filled the home and not only had the firefighters save the couples home from additional damaged they also rescued several irreplaceable family military items.
“They saved pictures, metals and the military burial flags from three soldiers in our family,” Metzoian said . “The firefighters came in the house and pulled out as much as possible before smoke, water or fire could do any damage.”
The cause of the fire was accidental undetermined and the historic family items were safe.

“I was just ecstatic,” said Metzoian. “My heart was partially mended.  My house was burned but when I saw the military items from my family, that was so sentimental to me, I cried my eyes out.”
The house was repaired over the next year and Rick and Cindi are very thankful for the efforts of the local firefighters. Among the items saved were the military burial flags of the couples’ fathers and Rick’s grandfather.
•Born in 1895, Joe Metzoian, Rick’s grandfather was a native of Armenia, a small country in the Caucasus Region landlocked by Turkey and Georgia near the Caspian Sea. At the outset of WWI in 1915, the Turks invaded Armenia, killing Joe’s wife and two children. Joe fled Armenia and arrived in Birmingham, Mich. joined the Army  then returned to fight the Turks as an American GI. The burial flag is unique since it displays 48 stars, prior to the addition of Alaska and Hawaii.
•Born in 1923, Donald Cunin, is Cindi’ father and was a native of Maximo, Ohio. He enlisted in the Army in 1943, and served in the South Pacific. Cunin received an accommodation for heroism behind enemy lines as he saved pinned down America Soldiers. The letter along with his burial flag was saved.
•A Pontiac native born in 1929, Edward Metzoian, Rick’s father enlisted in the Army in 1951 and served in the Korean War. During his time, Edward was a POW guard and interpreter who spoke four languages. Items from his service along with his burial flag were saved.