By David Fleet
Editor
The silk is still bright blue, the fringe is golden and threads used in embroidering the letters are pristine. 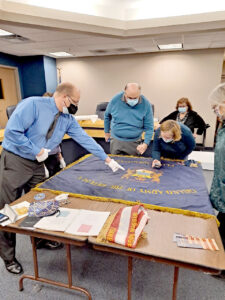 “It’s real,” said Matt VanAcker, Curator/Chair of Save the Flags of Michigan. “The flag is ‘as mute as the grave,’ but if this flag could talk it would tell stories shared by Civil War veterans from Michigan and the daily battles they experienced.”
On March 10, VanAcker along with Atlas Township residents Dawn Bastian and Carol Powers of the Goodrich/Atlas Historical Society gathered at the Genesee Township Hall to help authenticate an historical flag recently donated by an area resident.
The 50 inches by 66 inches machine made Grand Army of the Republic flag was once displayed at the Gov. Crapo Post No. 145 in downtown Flint. The hall was located in the Dryden Building 601 S Saginaw St.
“The old flag was discovered at a downtown Flint business stuffed in a locker,” said VanAcker. “An employee found it and it ended up in the hands of a Flint resident David Norris whos great-grandfather, Talmon C. Owen, fought with the 10th Michigan Infantry organized in Flint during the Civil War.”

The original GAR flag represented Gov. Crapo Camp No.145 chartered on June 7, 1883 in Flint, and included a membership in excess of 500 veterans, who had rendered honorable service to the United States. Henry Howland Crapo, was a resident of Flint and Governor of the Michigan during the Civil War, from 1864 to 1868.
Bastian said her great, great grandfather George Pettit served in the Civil War and was also a member of Gov. Crapo Camp No.145.
“It was very moving to see, the flag was something my great, great grandfather once looked at it,”she said. “He saluted it, he marched with it and the GAR Flag was at his funeral. Members of the Flint GAR, honored him and were there when he was buried.”
The flag past the eye test, said Bastian.
“The silk thread in the flag matched perfectly fabric from that era of the 1880s,” she said. “It was in amazing shape and I’m very happy the flag survived. At one point the GAR building burned so, it’s amazing the flag survived. They saved many items.”
VanAcker said the flag will now be preserved with several Michigan battle flags carried by the men who were members of the GAR. It will now be part of the Michigan Capitol Battle Flag a collection that includes 240 battle flags carried by Michigan soldiers in the American Civil War, the Spanish-American War, and World War I.
“The GAR flag would have been in parades leading marching Civil War veterans and been displayed at the GAR Hall,” he said. “Michigan had hundreds of GAR halls and were part of the landscape about 100 years ago.”
The Gov. Crapo Camp Post No.145 was closed in 1937. However, the Sons of the Union Veterans was chartered in 1992 with the name Gov. Crapo Camp Post No. 145.