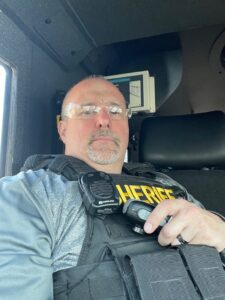 the SWAT Team.
Chip Schultz, a school board member since 2011 and veteran detective/fire and arson investigator for the Oakland County Sheriff’s Office was one of a host of deputies, area residents and civilian employees who were honored with citations and awards by Oakland County Sheriff Michael Bouchard. The honorees were thanked and acknowledged on Aug. 10 during a ceremony held in the Board of Commissioners Auditorium on the county campus.
“I am exceedingly proud of the commitment our deputies and staff exhibit every day in keeping our residents, communities and businesses safe and secure,” Bouchard said. “I’m grateful too for the many residents whose selfless contributions have made our job easier. This is the one day a year when we publicly thank and honor the women and men of the Oakland County Sheriff’s Office and community members for their contributions, bravery and skill, and they certainly deserve it.”
This year’s ceremony combined awards from 2019 and 2020, as there was no ceremony in 2020 because of the pandemic.
“It’s an honor to serve as a negotiator on the SWAT Team and be there for the community,” said Schultz.
Schultz, was with the Oakland County Sheriff’s SWAT Team that responded to an incident on Feb. 27 in Royal Oak where an armed man barricaded himself in his home.
The suspect was dressed in military-style clothing, had multiple weapons (handguns and rifles), and had fired over 30 shots indiscriminately out of the home into the neighborhood and at Royal Oak officers before the SWAT Team arrived, according to news reports.
According to news reports, the Oakland County SWAT team took over the scene around 4 p.m., and residents on nearby streets were told to shelter in place, lock their doors, stay away from the windows and take cover in their basements.

The neighborhood features smaller single-family homes, duplexes and apartment complexes near the border with Clawson
After negotiations halted following two-and-a-half hours without contact, the SWAT team used a robot and drone to search the house. The man reconnected with police but disabled the drone. He also donned a gas mask, refusing to surrender, police said.
After a long and systematic process of attempted negotiations that lasted several hours, the suspect did not respond or comply with the negotiators requests to surrender himself. Suddenly the suspect disappeared into the back of the home and reappeared with a long gun. The subject pointed the rifle in the direction of the SWAT Team members on the inner perimeter, and it was at this time the suspect was engaged and the incident was ended.
The team was cited for protecting the residents of Royal Oak, other law enforcement personnel, and the members of the team.