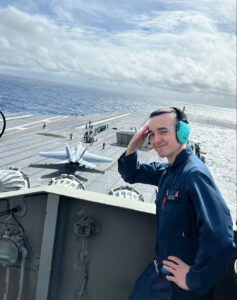 “Never ever,” he recalled.
Despite Bills’ early reluctance to a military career, his unique contribution to the Navy and determination will play a vital role in the nation’s defense.
Bills shared his story during a recent leave of duty.
During Bills’ junior year at Brandon High School, representatives of the military offered the Armed Services Vocational Aptitude Battery or ASVAB test for those interested in joining after high school.
“They said I could get out of three hours of class if that happened,” he said. “Cool, I’ll do that. So, I took the test and forgot about it.”
Following graduation from BHS in 2017 and just before starting at Oakland University, where he had a full academic scholarship the Navy arrived at Bills’ home.
“They informed me I did very well on the ASVAB,” he said. “I could join the Navy in the nuclear field.”
Bills declined since he was attending OU for free—but that changed following his freshman year of college.
“I was sitting at home with no job, all my friends were at college,” he said. “My dad suggested I contact the Navy to reconsider the offer.”
The opportunity looked much better in the Navy, so on July 18, 2018 Bills signed on for a six year stint.
Following boot camp at Naval Station Great Lakes, Chicago, Bills moved on to Naval Nuclear Power Training Command, Goose Creek, SC. until November 2019. Following graduation, Bills earned the rank of Electronics Technician Nuclear Third Class Petty Officer (E-4).
“It’s not bombs,” he said. “It’s nuclear power and it’s safe, the Navy has been operating nuclear power submarines and aircraft carriers for more than 70 years with no accidents. We are the safest community in the world. That’s why the school is so rigorous and difficult. ”
During the training, Bills spent some time on old retrofitted submarines.
“I volunteered to be on a submarine,” he said. “Hoping to go to the west coast—a fast attack sub on deployment to see the world and control the reactor while I did it.”
The Navy had other plans following graduation from “Nuke School” in June 2020.
“We were all praying for me to be on a sub or ship that was out to sea,” he said. “But I ended up on the only ship in the entire Navy that was going to be in dry dock the entire time I was in the Navy. I was crushed and mad at the Navy. It was the one place I did not want to go.”
Bills orders were to the aircraft carrier USS John C. Stennis, the Nimitz-class nuclear-powered supercarrier in the US Navy, named for Sen. John C. Stennis of Mississippi. The 1,093 feet carrier had been temporarily dry docked in Norfolk, Va. since 2019 for refueling and a complex overhaul. When operational, the Stennis carries 90 fixed wing helicopters and 6,500 officers and crew with an air wing.

Like other nuclear-powered carriers, the Stennis which was launched in 1993, needs to be refueled every 25 years. Since Bills was trained in nuclear power by the Navy, replacing the fuel rods would be his mission.
“I caught the Stennis while we were at the halfway point,” he said. “I was sad and demoralized and was willing to take any ship that moved. ‘The needs of the Navy outweigh the needs of the individual, ’that’s what the Navy told me. But eventually, it got better when I decided to make it better.”
Bills found a church in Norfolk.
“I just happened to walk by a church, where people were praying,” he said. “They invited me in and my life changed, I gave my life to Christ. Since that time I’ve made new friends, and been the best I can. I started to work harder on the ship and now have hope above the Navy. ”
Now, what Bills thought was a bad thing about working in a dry dock and not going out to sea ended up to be a blessing.
“I’m now home,” he said. “It’s a small chance to work on a ship in a dry dock—there are procedures that no one else sees.”
Today Bills is a supervisor on the Stennis refueling team and a certified shut down reactor plan operator.
Bills finally did have an opportunity to go to sea.
In February, Bills joined the crew of the USS George H. W. Bush aircraft carrier for a one month tour as part of the reactor control division.
“It was everything I wanted, but it was fun for about a week,” he said. “The rest of it is repetition—same sailors, same job everyday. It’s not like you can walk to the grocery store. It’s a rough life-style. It made me realize I’m just so glad not on a submarine.”.
Bills is now considering a one-year reenlistment and will stay on the Stennis until it goes back out to sea.
“The Navy’s been a journey,” he said.
Avery is the son of Scott and Theresa Bills of Groveland Township.

One Response to "Local readies dry-docked supercarrier for next deployment"