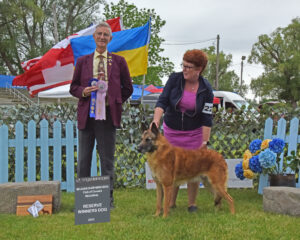 competing in the 146th Westminster Kennel Club Dog Show, Tarrytown, NY.
For the second consecutive year, Arney will be showing her Belgian Laekenois, 6 year year “Pilote,” an AKC Grand Champion who is currently ranked in the top five in his breed, she said.
A total of 3,200 entered in the event, the second longest
I have been showing for 49 years and Pilote has been my best,” she said. “I started when I was 11 years old and shown a variety of breeds.”
“I am an owner handler which means I train and handle my own dog in the ring,” said Arney. “Pilote is titled in many difference performance events like scent work and barn hunt. He’s also Farm Dog Certified along with his Canine Good Citizen title.”
Pilote was imported from Belgium as a puppy, and is part of the Herding Group at the show which live streamed on Fox networks is on the grounds of the Lyndhurst Mansion along the Hudson River.
The show starts on June 18 with both agility and obedience. The final Best in Show is June 22.