By David Fleet
Editor
A Brandon Township man and his family are safe following a bomb threat in Washington DC. 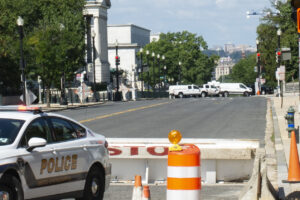 “My wife had just walked  into the  Jefferson building Library of Congress,” he said.
Heath said security guards started yelling their direction that we had to leave the steps.
“The whole building suddenly was surrounded by police cars,” he said.  “I thought at first the area was being cleared out because a high level government official was driving by.”
A nearby Library of Congress security guard informed Heath that someone called in a bomb threat and the vehicle /suspect pulled up right behind him by the steps. The security guard said not to worry about your wife and that she’ll be evacuated out in just a few minutes, recalled Heath.
“He told me he’d keep an eye out for her, and please wait with your kids across the street,” said Heath.
Eventually Peggy was evacuated through an underground tunnel that connected to the nearby Madison Library of Congress building but she remained in lock-down for an hour or so underground.  Other Library of Congress employees were evacuated out the backdoor of the building. Eventually the guards started pushing Heath and his children back an additional block away from the Library of Congress and cleared out all construction workers along with some additional businesses. According to news sources, following an hours-long standoff  the suspect — identified by authorities as Floyd Ray Roseberry, 49, from Grover, N.C. — surrendered and was in custody.
“He gave up, did not resist, and our folks were able to take him into custody,” U.S. Capitol Police Chief J. Thomas Manger said Thursday. “We don’t know what his motives are at this time.”
According to news reports, the truck was removed from the scene. The U.S. Capitol Police did not find a bomb in the vehicle, but said that “possible bomb making materials were collected from the truck.”
Heath spoke with Library of Congress employees during the evacuation and they said that it’s common they receive suspicious packages, but this was really out of the ordinary.  Another employee said that since the capital riots, security procedures have gotten a lot more strict and more barriers were put in place inside the buildings.
“After about an hour and half, a voice came over a loudspeaker telling all employees of the Library of Congress to go home, at that point my wife texted me letting me know that she was evacuated to a nearby park,” said Heath.  “We ended up meeting her at the park.”
The Zietz’s family returned to the Library of Congress on Friday where Peggy completed her research. They returned to Michigan on Sunday.