Locals gather for ‘March for Our Lives’

By David Fleet
Editor
On March 24, some of the survivors of the deadly shooting rampage at a Parkland, Fla., high school led hundreds of thousands in “March for Our Lives” 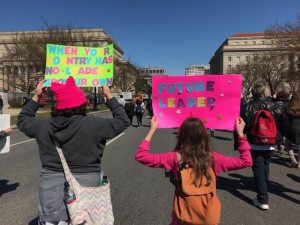 events across the country, delivering a message to Washington that action on gun violence is necessary.
Saturday’s march followed the March 14, National School Walkout day, impassioning demands for stricter gun control laws while honoring the 17 students and faculty members killed Feb. 14 at Marjory Stoneman Douglas High School.
The estimated crowd of more than 800,000 jammed Pennsylvania Avenue in Washington D.C. included several local residents including Jennifer Riggs, a Goodrich School Board member for the past four years. Riggs, along with her daughter Summer, 9, and father Michael Hawley made the 12 hour trek to the Washington D.C. area for the march.
Riggs was motivated to attend after seeing the Parkland, Fla. students take action.
“I was in school when the Columbine High School massacre occurred in 1999,” she said. “That event I will never forget. Back then we did not have safety drills like we have today. So, it was the beginning of the fear in schools.

Then years later the Sandy Hook Elementary School shooting occurred on Dec. 14, 2012, in Newtown, Connecticut—my daughter Summer was in kindergarten at that time. That hit me very hard.”
Now the Parkland High School students have moved Riggs to join the march.
“It’s about those kids striving to bring attention to school safety,” she said. “Seeing those Parkland kids taking action was very inspirational. There were some very sad moments during the march—honestly I cried a lot. There were so many gut-wrenching speakers—then there was a silence. A long awkward silence, followed by the massive crowd holding up the peace sign.”
Riggs recalled, 9-year-old Yolanda Renee King, granddaughter of Martin Luther King Jr. addressing the crowd.
“I remember King saying, ‘I have a dream that enough is enough,’” said Riggs. “The crowd really responded to her. There was no hostility and no anti-government protesters. Just a few, ‘We are going to vote you out,’ signs.”
Riggs said it’s about making better gun regulations.
“I was there to start a conservation to make a change,” she said. “I want students today to be leaders. Always think how you can be a leader in what ever you do. When your county is lacking a leader, grow your own. Take up the cause when you feel a change needs to occur. Be the change. Don’t sit back. Be an educated voter.”
Bill Haney, a Brandon Township resident an long-time author also made the trip to Washington D.C.
“If there is any hope for a decent future, for a civil America, it beats in the hearts of the kids I marched with in Washington on March 24,” said Haney. “The kids, yes, but also parents and grandparents of all hues, social classes, and religious persuasions. Freedom of choice, freedom of assembly, freedom of speech—America’s bedrock freedoms.”
An estimated 800,000 American citizens walked miles to stand before the “People’s White House, said Haney.
“Oh, you could catch a glimpse of it through the iron fencing, somewhere beyond the Hummers, assault vehicles and armed military,” he said. “No matter—there was no one home there that day to pay any mind to ordinary citizens, nor to survivors of the latest mass slaughter in an American high school.”
Perhaps it was better that way… not an elected official in sight. Not on this day when the best traits and values of American society were on display, he added.
“Who would have wanted a president to forego yet another round of golf at Mar-a-lago, far from the madding crowd. Not to be outdone, Congress was also absent literally as well as figuratively. Senators and representatives had scattered like frightened starlings. They flew off to the safety of home districts, taking yet another break from their exhausting work of ignoring the business and the wishes of the citizens who elected them.”
When the sun rose on Washington, D.C., on March 24, it was business at the same old stand.
“But then the people marched,” he said. “When the sun set that day, America had changed. It would take a while (especially for politicians and the old guard who put them in office) to understand just how profound a change that would be.”
“The marchers could feel it, could foresee that in seven months the realization would wash over the most ineffectual and ill-regarded Congress perhaps ever. A tsunami of citizen outrage inundating them in waves of pink and brown and black and youth and yes, of geezers who had finally seen enough, had enough. Together they raised their voices—and certainly their spirits—in a chorus that will echo in their hearts and then thunder in November—”Enough is finally enough.”