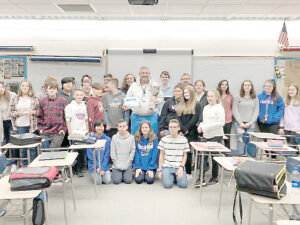 “My daughter’s due to have a baby in August, so that’ll be my first grandchild,” said Hendershott. “And I’ve just gotten to the point in my life where I’d like to spend my time with my family.”
For the last 36 years of his career, Hendershott has taught at Brandon. In that time, he taught special education for 17 years, US history and geography for 14 years, and for the last seven years he also taught physical education. His parents were also in education, and he said he always wanted to follow in their footsteps.
“I’ll miss the kids,” he said. “That’s the hard part every day, looking at them and seeing them and knowing I won’t be walking in and seeing kids and talking to them and finding out how things are going, how their lives are.”

Hendershott has also lived in Brandon for the last 34 years, and he plans to spend his retirement working at home on his house and getting into homesteading. He and his wife have begun raising farm animals along with their five dogs.
“I’ve spent a lot of time coaching and being at school and I didn’t put as much time into my family and house as I could have or should have,” he said. “I’m also going to spend a lot of time visiting my dad up north.”
Hendershott also coached various sports, including football, wrestling, track and basketball.
“I love the connection with kids and showing them they could do things they didn’t know they could do,” he said. “And have fun doing it.”
While he enjoyed his time teaching, it didn’t come without it’s challenges. The biggest change has been the use of technology.
“When I first started teaching, there were no computers,” he said. “Now, kids are walking around with phones in their hands that have more computer ability than Apollo 13, and they don’t know what to do with it.”
The other challenge he has faced lately is face-to-face interaction, which has worsened due to the COVID-19 pandemic.
“Lately it’s just getting kids to interact with each other appropriately,” he said. “They spend so much time on their phones and with technology, they don’t know how to interact with each other or with adults.”
He also said he liked working with middle school students over other grades.
“All ages are tough, they’re just different,” he said. “I’ve come to believe every teacher, if they’re a good teacher, finds their niche. I taught a couple years in the high school, and it wasn’t for me. I don’t see it as tough to teach in the middle school.”
And while he will miss his fellow middle school staff, he said he is looking forward to spending his retirement with his family.
“Middle school teachers are special, having been there for 36 years, the new teachers, the current teachers, the past teachers, it’s a special family,” he said. “I have fond memories of the students and staff from when I was hired to where I am now. I’m going to miss seeing people on a daily basis, kids on a daily basis. I want to thank them for the memories, for the fun times, and for allowing me to be part of our lives.”