By David Fleet
Editor
When Alex Nick steps to the plate he’s all business.
The 18-year-old designated hitter recently helped lead the Goodrich Martians to the 2021 Flint Metro League Championship and a 29-5 season 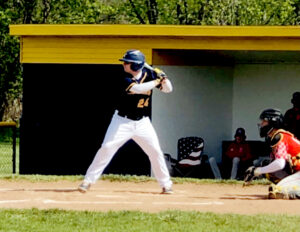 heading into the postseason.
“He knows what he needs to do to be successful,” said Martian Varsity Baseball Head Coach Bob Foreback who was inducted into the Michigan High School Baseball Coaches Association Hall of Fame in 2016. “He leads our team with a .468 batting average and hits sixth in the lineup. Alex barrels up the ball, drives the ball around the field and makes solid contact—and gets on base.”
While Nick has out battled a myriad hard throwing high school pitchers during his senior year, the hard hitting left hander has also outdueled another obstacle.
Nick is also on the Autism spectrum, a developmental disorder that affects communication and behavior. Although Autism can be diagnosed at any age, it is said to be a “developmental disorder” because symptoms generally appear in the first two years of life.
“I’ve had my struggles,” said Nick. “I just kept my head up and was driven to work harder. My biggest struggle is just not doing as well as I want to. But, this team and coach are very supportive. It’s the greatest group of guys I’ve ever played baseball with.”
Nick sometimes struggles with fine motor skills, such as tying his shoes and socializing.
Nick started his baseball career a little later in life at about 12-years-old. “I got into baseball when I was about 10 years-old watching the Detroit Tigers,” he said. “From that I started playing in the Goodrich recreation league and I really started liking the game and playing. It’s been all baseball after that.”
Nick first played in the Waterford Coaches Association League after trying out for the Goodrich School teams.
“I stayed with it and followed the career and style of Miguel Cabrera,” he said. “That’s why I wear number 24—I really like his hitting style.”

Nick made the Goodrich JV team and played with the freshman and sophomore. He also played on two travel teams during the summer. After Nick’s junior year was cancelled due to COVID he tried out and made the 2021 varsity team.
“I started pinch hitting the first few games and did alright so I’m a regular now,” he said. “I’m a natural left-handed hitter and favor the fastball, first pitch.”
Nick’s baseball skills and academics recently earned him a partial baseball scholarship to Concordia University-Ann Arbor this fall.
“Goodrich High School has been an excellent learning experience,” he said. “I don’t feel any different for any of the other kids. It’s been great.”
Coach Foreback said Nick is not the big power hitter.
“Our team has only two home runs all season,” he said. “I don’t think he’s hit the ball over an outfielder’s head all season. But, other baseball players need to take a lesson from Nick—hard work and put the ball in play.”