By David Fleet
Editor
Despite a cold rain, last Friday night was a great time to be a Martian. 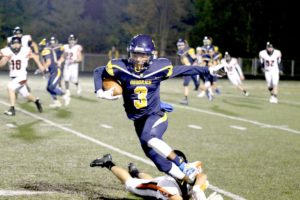 On homecoming the Goodrich Martians defeated Clio 42-16 clinching the first ever Stars Division championship of the new Flint Metro League. The win raised the season record to 6-1 overall and also a playoff birth. The Martians will take on Fenton, Oct. 18 for the overall Flint Metro League crown.
“Fenton is a great team,” said Tom Alward, head coach.  “Fenton, who is 6-1 also, are going to come at us with all we want.”
Alward has a 150-106 record with the Martians over 28 years at the helm.
“This team has come together very well,” he said. “We started slow with a close loss to Powers and have since been picking up steam and have found our stride. We have some players that can make big plays—skilled kids that in space can really move the ball. The Martians have given up a few too many yards rushing.”
The Martians offensive has been very efficient, rolling up 382 yards on just 35 plays in the win over Clio.
One of those key offensive players is GHS Junior Tyson Davis who tallied 4 touchdowns in the win over Clio. Senior JaCoby Brandon had 1 touchdown. Tucker Reichel carried the ball 3 times for 52 yards; Nolan Robb, 8 carries for 21 yards; Juwan Vines, 3 carries for 8 yards and Joey Powers, 2 carries for 4 yards. Tyson Davis had 7 receptions for 192 yards; Nolan Robb 1 reception for 53 yards; JaCoby Brandon 2 reception for 28 yards and Gage Ashley 1 reception for 22 yards.
“We are looking forward to a possible rematch with Powers in the playoffs,” said Alward. “There could also be another game with Brandon too, since we are in the same league now.”