By David Fleet
Editor
Goodrich —On June 16, a stellar record setting season concluded for the Goodrich Martians at McLane 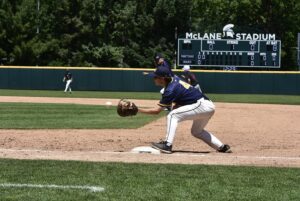 Baseball Stadium at Kobs Field, on the campus of Michigan State University.
The Martians lost in the state semifinals of the Michigan High School Athletic Association tournament 6-0 to Forest Hills Eastern en route to the Division 2 state baseball title. The Martians ended the season with a school record 37-3 record.
“The two best teams were playing in the semi final and Forest Hills out played the Martians to advance to the finals,” said Head Coach Bob Foreback, completing his 28th season who was named Flint Metro League Coach of the Year. “The team that scored first was going to win the game.”
Goodrich had a chance in the first inning when Carson Raether walked and on an errant pick off attempt advanced to second.  Travis Liford hit a rocket right to the center fielder.
“Six feet either way and Goodrich is up 1-0 with Liford standing on second or third base,” said Foreback. “Baseball is a game of inches and we hit a lot of balls hard right at their guys.  Forest Hills scored one run each in the second, third, and fourth innings with some bunts and some seeing-eye singles. After they scored the first run they were able to put the pressure on us and we didn’t respond well to that pressure.”
“It was an outstanding year with a group of men who worked and had fun while winning,” said Foreback.  “Those three things don’t happen to many teams.”
“This will have to be the best Martian team of all time,” said Foreback. “What they accomplished including a 32 game winning streak. It’s extremely difficult to go undefeated in baseball, it just does not happen. It’s harder to go undefeated then win a state championship.”
The 2022 Martians were self motivated, an attribute that set them apart from other winning teams.
“I did the least amount of coaching this year,” said Foreback. “When you have a team like this you don’t have to motivate them. They would practice on their own. The best teams govern themselves. There were 17 players that came to work everyday. It’s hard to do.”
There were never excuses, he said.
“I thank the community, the moms and dads that have taken their kids to travel baseball over the summers,” said Foreback.
Three Martians were named to the All State Team Senior Noah Keller, 1st team pitcher; Sophomore Carson Raether, 1st team catcher and Senior Travis Liford, 2nd team infield.  Keller was also named to the Dream Team which is the best player in the state in all classes.  He was named one of the top five pitchers in the state.