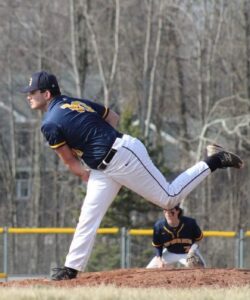 Keller struck out 13 while only walking one for the win in the first of two in the April 6 double header at Goodrich. Noah dominated the Spartan hitters only allowing two baserunners on a walk and hit by pitch. Erik Wyczalek had two hits to lead the Martians at the plate while Brady Gauthier had two RBI. For GHS Bryston Hautamaki, Joey Belanger, Jack Foreback, and Noah Keller each had one hit.
Keller now has 176 career strikeouts, passing Jake Bourassa 167 (GHS Class of 2009). Keller now trails Max Bell 203 (GHS Class of 2004), Kori Garman and Michael McCormick (GHS Class of 2003).
The Martians also won the nightcap 13-2.
“I expect this team will break some season offensive records,” said Head Coach Bob Foreback. “Noah Keller’s no-hitter was not made last night during the game. Noah spends countless hours during the summer and off season and that is why he threw a no-hitter. While on spring break last week at 9 p.m. one night he was throwing a bullpen session on a lighted tennis court somewhere in Florida. I asked him who he threw to because he went with his family and not another Goodrich baseball player. He told me he saw some random athletic looking teenager walking around the condo and asked the kid if he wanted to play catch. Good players can rely on athletic ability, great players go above and beyond. Noah is a great player.”
Coach Foreback is also on the cusp of a major record.
With just 12 more wins this season, Foreback will reach the 700 win mark—only 19 other boys baseball coaches in Michigan have reached that milestone.
Last year the Martians stormed the Flint Metro League and took first place with a 22-1 record in our inaugural season. The team has four seniors planning to play baseball in college: Noah Keller/Cornell, Travis Liford/Adrian, Brady Gauthier/Delta, and Josh Denton/Lawrence Tech.