Brandon Township Clerk Candee Allen, Supervisor Kathy Thurman, and Treasurer Terri Darnall with the 19th amendment victory flag. The 36 stars represent the 36 states needed to ratify the amendment for it to become part of the US constitution. Photo by Patrick McAbee.

By Shelby Stewart
Staff Writer
On June 10, 1919, Michigan became one of the first states to ratify the 19th amendment, guaranteeing women the right to vote. Michigan was also the 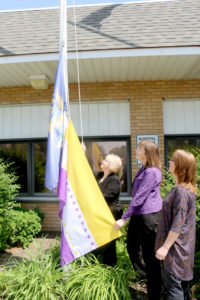 first state to guarantee full suffrage for women, unlike other states on June 10 who offered voting in certain elections.
“It’s very important everyone votes,” said Brandon Township Clerk Candee Allen. “I believe having women vote for the past 100 years has helped our country become stronger, as all people are allowed to have their voices heard.”

Over the next year, 36 states would ratify the amendment, making it an official part of the United States constitution.
This month 100 years later, Brandon and Groveland townships have passed resolutions to fly the American Suffragette Victory flags in honor of the anniversary of suffragettes fighting for equal voting rights.
“Whereas the women of this nation initiated the most significant women’s movement in history -the need for women’s suffrage […] Now therefore be it resolved that the Charter Township of Brandon remembers and celebrates the historic women who fought for their right to vote and recognizes the courage and inspiration of these bold women to change the course of history,” read part of the resolution for Brandon Township.
Allen also finds that in the last two elections, that the difference between men and women voters has been within 2 percent of each other.
“In November 2012 there were 5,769 (65.96 percent) male voters and 6,063 (67.51 percent) female voters,” said Allen. The percentages are the percentage of registered voters that cast their votes. “In November 2018, there were 5,997 (62.23%) male and 6,264 (60.95%) female voters. The total increase for all voters in 6 years is 429 voters total.”
Groveland Township Clerk Patti Beck is also excited to receive their flag honoring the ratification of the 19th amendment.
“I just think that it’s important,” said Beck. “You know, women contribute a whole lot to our communities and our country. It is the 100 year anniversary and I was very excited when I saw that they (Oakland County) were going to mark that. I know they fought hard for us women and the right to vote, so I am thrilled that this is going to be celebrated. Women are strong and I think we are very important to society.”