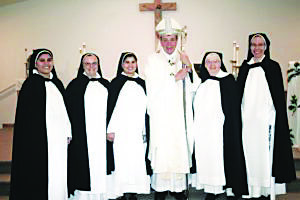 of Mt. Thabor Monastery, established in Groveland Township more than 50 years ago died Nov. 14.
She was 90 years old.
Sister’s parents William Joseph and Florence Anna (Seavers) predeceased her. Her brothers William and Kenneth also predeceased her. She is survived by five nephews and one niece.
Sr. Anne Mary was born in Brooklyn, New York in 1932, where she grew up in a strong family. After graduating from high school, Sr. Anne went to work in a bank in Bergen Beach, New York, a predominantly Jewish neighborhood which she loved. After hearing the call to leave everything behind and follow Him, she did as she heard, and in 1955 entered the Dominican Monastery of the Perpetual Rosary in Union City, New Jersey, commonly known as the Blue Chapel. In 1967, Sr. Anne left the Blue Chapel to begin a new Dominican religious community with Sr. Mary Martin DiGiambattista.
In 1972, the two women were successful in building and establishing Our Lady of Mt. Thabor Monastery. The property was purchased from area resident Albert Renchik. In 1973, they moved to the 10 acres in the 1200 block of Bald Eagle Lake Road. Later they purchased nine additional acres in the township.
“Above all else, it was Divine Providence and so many people’s cooperation with it that connected Sr. Anne and Sr. Martin to Ortonville and made possible the establishment of the monastery,” said Sr. Elizabeth.   “And it is that same Divine Providence that will allow the work to grow and flourish even now, after her holy death.”
In her years in the Blue Chapel, Sr. Anne served as bursar and lived a strong and faithful community life in a large community of 50 sisters. As co-founder of the Ortonville community Sr. Anne literally helped dig the foundation and relying purely on Divine Providence, together with Sr. Martin and countless friends and benefactors, established and served for over 50 years a community which will be a historically significant chapter in Dominican religious life.
The process of closing Mt. Thabor Monastery is ongoing. In the end three sisters remained, Sr. Anne, Sr. Elizabeth and Sr. Veronica, who moved to the Dominican Monastery of Mary the Queen in Girard, Ill.
In 2022 Sr. Anne Mary and Sr. Elizabeth moved to the Monastery of the Blessed Sacrament in Farmington Hills, in order to continue to live the contemplative monastic life in a community with greater numbers and support.
In August 2022, after living a healthy 90 years, Sr. Anne was unexpectedly diagnosed with cancer which just three months later became the cause of her death.
Sr. Anne Mary will be missed and always remembered by her sisters, friends, family, and benefactors who loved her so dearly.