By David Fleet
Editor
In late 1945, about six months after the end of WWII, Navy Radioman William Meadowcroft was playing basketball on the U.S. Naval Base Guam. 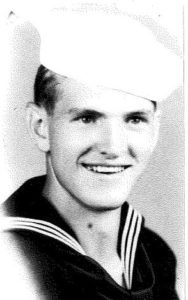 “We were in the middle of a game and a buddy thought he received a bee sting on his right ear,” he said. “So we took him to the medic and the doctor said it’s not a bee bite, rather a bullet wound. Another inch to the left and he would have died. There were Jap snipers still in the jungle around the base and they were still shooting at us long after the war ended.”
At 9 a.m., Memorial Day, World War II Navy Veteran Meadowcroft, now 94 years old, will join other area veterans in the Ortonville parade.
“They shot out the windows of our Jeeps too,” he recalled.
Meadowcroft, a former Ortonville construction company employee with a host of family members still in the community reflected on his Navy experience more than 70 years ago.
Born March 30, 1925 in Whitinsville, Mass. Meadowcroft graduated Northbridge High School in 1942 before attending engineering school at Worcester Polytechnic Institute. After two years of school, Meadowcroft enlisted in the Navy at 19 years old. He entered Sampson Naval Training Station near Geneva, N.Y., where during its three-and-a-half years of its operation during World War II, trained 411,429 naval recruits.

While stationed at Sampson, Meadowcroft received news of his older brother John’s death.
“I was living in the (Sampson) barracks and it just happened that four or five friends from our hometown were there with me,” he said. “They knew of his death before I did but did not want to say anything. John was 12 years older and my only sibling was with the 45th Infantry Division serving in southern France. He was wounded twice before he was killed in action. John sent me two letters the day before he died letting me know what was going on—he was always in the forefront of battles.”
From Sampson, Meadowcroft was moved to Advanced Radio School at Texas A&M, College Station, Texas then to Great Lakes Naval Training Station, Ill.
“(Franklin) Roosevelt died in office about the time I arrived at Great Lakes,” recalled Meadowcroft. “That same time, April 1945 I was transferred to San Francisco in preparation to be shipped out to the Pacific.”
The war in Europe ended May 8, 1945.
While stationed at Skaggs Island Naval Communications Station near Vallejo, Calif., Meadocroft, ran into a center fielder attempting to catch a fly ball during a baseball game. As a result he spent several months in the hospital.
On Aug. 6 and 9 1945, the United States detonated two nuclear weapons over the Japanese cities of Hiroshima and Nagasaki ending the war in the Pacific.
“It seemed to me that ever since my only brother died in service and I was the only family survivor, the Navy moved me to safe places,” he said. “They never said that to me, but I stayed out of the war zone.”
Meadowcroft was transferred to Pearl Harbor in the fall of 1945.
“During my flight to Hawaii, I sat between an admiral and major general,” laughed Medowcroft. “I was the only enlisted man on the flight into Pearl. The damage from the Japaneses attack in 1941 was still looking pretty bad when I got there. Some of the ships were still flipped over. It really brought home the damage the Japs did, the damage of the bombing could still be seen.”
At Pearl Harbor, he boarded the 512 feet USS Manila Bay aircraft carrier and sailed to Saipan a South Pacific Island about 1,400 miles from mainland Japan.
“They dumped me off in Saipan in the fall of 1945,” he said. “We then boarded a 150 feet patrol craft to the Island of Guam about 135 miles away. We were bringing in Japanese soldiers from the jungles that thought the war was still going on.”
American soldiers along with Japanese officers would go out in the jungle and get holdouts from the war.
“I saw some of the Japanese soldiers—they were very small men,” he said. “Their uniforms were just rags and they were damn hungry. We fed them and they ate food they had never seen before. They would not let us talk to them.”
Meadowcroft served under Admiral Arthur William Radford who commanded carrier task forces through several major campaigns of the Pacific War.
“We wondered why the heck we stayed there in Guam,” he said. “The war was over and we were living in Quonset huts, still sending secret messages. We even survived a hurricane and it seemed to rain everyday. Our base was on the high part of the island.”
In May 1946 he sailed to San Francisco on an Italian Luxury liner the Navy took it over. After the 10 day cruise Meadowcroft boarded a train for the east coast.
“I arrived in the Boston Navy Yard in June 1946,” he said. “My dad picked me up.”
In 1947 they exhumed John Meadowcroft’s body from France.
“My brother’s death was the first they brought back as a World War II casualty in our small town,” he said. “Many of his friends and of the family were there. I met my wife to be about three weeks before that.”
Medowcroft returned to classes at Polytechnic and graduated in 1948. He married Kathleen in 1949. He later earned a Master’s Degree in sanitary engineering and served as City Manger for Inkster 1956-66. He entered private practice as a construction engineer and retired in 1987.
William and Kathleen had two children, Kathleen and John who served on the USS Constellation aircraft carrier during the Vietnam war and a great grandson currently aboard the U.S. Toledo submarine. Kathleen past away in 2012 after 63 years of marriage.