NCAA Semifinals:‘This game has been a long time coming for the team’

By David Fleet
Editor
Mathew Harrison will not be home for long this holiday season. 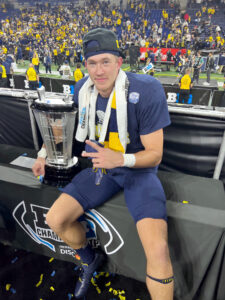 The 6-foot-3-inch, 207 pound wide-receiver for the Michigan Wolverines and 2019 Brandon High School graduate will travel with the team to play the Georgia Bulldogs in the Orange Bowl at Hard Rock Stadium, in Miami Gardens Fla. for the NCAA National Semifinals.
“It does not feel real,” said Harrison, a Blackhawk football standout who overcame injuries, a pandemic and the rigors of making a Big 10 football team. “It has really not set in yet. But, this game has been a long time coming for the team.”
The Wolverines earned a spot in the National Semifinals and a Big Ten title with a 42-3 win over Iowa on Dec. 4.
“I know we are underdogs going into the game but that was the case three times during the 2021 season,” he said. “We won them all, we just don’t mind.”
Harrison’s road to the Big House and the University of Michigan Football roster as a preferred walk-on has been anything but smooth.
“It had been a dream of mine to play college football,” he said. “Several schools were looking at me at the time and I was going on visits.”
Academically, Harrison was accepted at the University of Michigan and attended the football Preferred Walk-on Day on Feb. 2, 2019.
“I came to Ann Arbor and fell in love with the UM campus,” said Harrison. “I really connected with the football coaches and the staff, it was the right fit for me.”
Harrison suffered a season ending injury and did not dress for the 2019 season. Then the pandemic hit in 2020 but Harrison stayed on course and this spring made the 110 player roster for an abbreviated season as a wide-receiver.
“I dressed for every home game last season,” he said. “Now, for the 2021 season I still have four more years of eligibility.”
The University of Michigan roster is deep with 13 players at the wide receiver position.
However, Harrison stepped onto the field during the Sept. 18 Michigan 63- 10 victory over Northern Illinois at Ann Arbor.
“All I wanted was to get on the field,” said Harrison. “When coach called me, my heart beat so fast, my shoulder pads were moving. But, I was ready to play. It’s what we do every day of practice.”
From a playing perspective, there was something different about the 2021 Michigan Wolverines, he said.
“The energy is different,” said Harrison. “We showed it on the field. The Washington Huskies game in early September was pivotal that built confidence as did the Wisconsin win in Madison. The Badgers beat us 49-11 last year.”
The Michigan State Spartans handed Michigan the season’s only loss, 37-33 in East Lansing.
“We grew as a team after the loss,” he said. “We learned to deal with adversity. We still have a long way to go.”
The team plays for each other, he added.
“There are many parallels between playing for the Brandon Blackhawks and now Michigan,” he said. “Coach Zube emphasized playing for the team, the family—not just the individual. We have some superstars on this Michigan team who really care about the whole team. All 120 players on the team make the difference.”
“You never know what can happen during the season,” he said. “The energy on the team this year is unreal.”
Harrison is a junior at the University of Michigan Ross Business School and working for a degree in finance or business information technology. Mat is the son of Joe and Lisa Harrison of Brandon Township.