By Shelby Stewart
Staff Writer
Brandon Twp.- The public library has a new director, and she’s looking forward to connecting with the community. 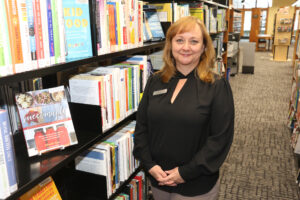 Laura Fromwiller grew up in Holly, and aspired to be a library director from a young age.
“The director at the Holly Library when I was growing up was one of my mom’s closest friends, and I thought she was just the coolest lady,” said Fromwiller.
Fromwiller went on to work at the Lapeer District Library for over 20 years, during which time she received her master’s degree from Wayne State University. She was branch manager at the largest branch of the Lapeer library, after which she took a position at the Oxford Public Library as head of adult services. Her position as library director at the Brandon library began on Jan. 3. Fromwiller replaces Library Director Rebecca Higgerson, who retired after serving since January 2015.
“I wanted to be a director, and it was local, so when I saw this opening, I jumped at the chance,” she said. “It’s a great library, it’s a beautiful building, and the community is wonderful.”
Fromwiller’s plans for the library include more programming and connection with the community, but currently some programs have to wait for the current COVID-19 pandemic to ease.
“We have to be patient, but programming has always been a really strong suit for me, and I feel like it’s really important for all ages,” she said. “I have lots of plans. Most of what I would really like to do is connect with the community.”
Fromwiller said the community and staff have been very welcoming so far, and she’s looking forward to getting to know everyone.
“I think one of my strong suits is connection with the community, I like going to the village meetings, the township meetings,” she said. “I want people to be proud of their library and know me and feel comfortable coming to me with their ideas and concerns.”
In addition, she said she would like to be more involved with the schools and feature local speakers.
“Connecting with the school is always a good thing,” she said. “I love bringing in community people, there are so many people in the community that have these talents that go unnoticed that we would love to see.”
To contact the Brandon Township Public Library, call 248-627-1460.