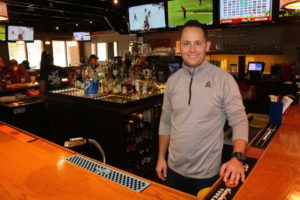 3711 Hunt Road, Lapeer.
The Knisely family, who have owned the award winning Lake Inn since 2011, have perfected the lakefront dining experience, said Brett.
“That same relaxed, friendly and welcoming environment synonymous with the Lake Inn, on the shores of Lake Nepessing will now be reflected at Bullfrogs,” said Brett a 2004 Lapeer West High School graduate. “People can stop by Bullfrogs with their friends and family—feel comfortable, not rushed. Customers can enjoy themselves—have a couple of cocktails and spend time enjoying some time on the lake. That’s what made the Lake Inn so great and we’ll create that same atmosphere right here at Bullfrogs.”
Earlier this year the Lake Inn was named the Best Waterfront Restaurant in the Flint/Saginaw/Bay City/Thumb Area by M-Live.
“People are very happy with the service, food, atmosphere and overall general product at the Lake Inn,” he said. “We’ll bring those same pillars down here to Ortonville.”
The menu at Bullfrogs is now very similar to the Lake Inn.
“It’s not changed much over the years,” he said. “It’s a tried and tested menu. We are also very comfortable with waterfront dining and the tiki bar concept. The menu has been very successful up there on Lake Nepessing.”
“Bullfrogs has always been much of a bar scene, we are now transitioning away to a restaurant that serves great drinks,” he said.
The Lake Inn closed for an extensive remodeling project in September 2015 and reopened on Superbowl Sunday 2016.
“Since then Lake Inn was really put on the map,” he said. “It’s a lot bigger now. We also made sure to build in enough kitchen capacity to feed everyone. Even if you come in the Saturday night in the summer time we’re fast on service.”