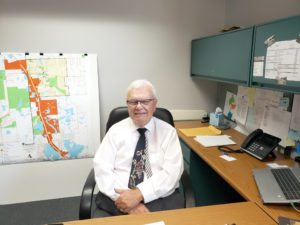 “We are pleased to have hired a new manager within three months of Bill’s departure, as the last Manager was an 8 month search,” said village president Tonja Brice. “We welcome Dale to the Village team, and staff, Council and community look forward to working with him.”
Stuart is a licensed attorney, and has been working in government for over 30 years. He has served as both a township trustee and supervisor in Independence township for a total of 20 years, as a manager in Keego Harbor, in Oakland township, and in northern Michigan as well.

“I’ve lived in Oakland County almost all my life, was born in Pontiac and grew up in Auburn Hills,” said Stuart. “I’ve been in Clarkston for 30 plus years.”
The village council approved his hiring pending a few more steps in a 6-0 vote at their special meeting Aug. 5. Councilman Mark Robinson was absent. Stuart is due to start as soon as possible.
“It’s going to be nice,” said Brice. “We appreciate that he’s local and knows the area, I think that’s important.”
Stuart looks forward to working within a community that is close to home for him.
“I look forward to the challenges of the community and helping them,” said Stuart. “And doing things better as there’s room to be done better. I prefer to be able to stay where I am, and I’ve known Ortonville, of Ortonville, for forever.”
Previously, the position was held by Bill Sprague, who resigned in May. Three rounds of interviews were held for the position, and Stuart was interviewed by the board on June 27, and offered the position on July 22 originally.