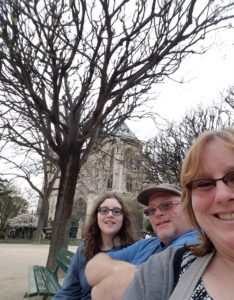 “The windows are about 30 feet across or more and they each tell a story,” said Maunder. “The stained glass (windows) were hand crafted hundreds of years ago. Some have since been refurbished. I thought, those windows were not going to survive that horrific fire— the heat on the lead, the pressure on the glass from the heat would be devastating.”
Maunder, a Western Michigan University graduate and math, French teacher for more then 26 years—lived in Rennes France in 1990 soon after the Berlin Wall fell. She has been in the Goodrich District for 21 years and currently teaches at the middle school.

According to news sources, on April 15 a major fire erupted at the Notre Dame Cathedral in Paris. The cathedral, which was undergoing renovations, suffered extensive damage as the blaze continued into Tuesday, April 16. As of press time authorities haven’t determined the cause of the blaze. The fire was brought under control as more than 500 firefighters battled the blaze. No deaths have been reported. Notre Dame construction began in 1163 and was completed in 1345. Since the fire more than $500 million has been donated to reconstruct the cathedral.
“In 1990 I first visited Notre Dame,” said Maunder. “I’ve been to Notre Dame several times with students as a class trip over the years. One of my favorite places in Paris is actually behind the Notre Dame Cathedral. It’s just peaceful back there, from the back side you can see the flying buttresses. Notre Dame is the center of Paris—but this is a peaceful location—you can have a picnic and watch the priests and nuns coming and going from the cathedral.”
Notre Dame is a way to experience Paris, she said.
“Anyone can visit Notre Dame,” she said. “You don’t have to be Catholic to go inside the cathedral. It’s a working cathedral, you can go to Mass and I have attended with my students at times. I have also been in Notre Dame Cathedral when the choirs are having a cantata—to hear the music bounce off the walls is an extraordinary experience for myself and students.”
“You can see the Eiffel tower when you’re in Paris, but Notre Dame has been the center of not just religion, rather of peacefulness (in the city) for almost 1,000 years,” she said. “To look at the artisanship that has been put in the cathedral is just amazing.”
Maunder said the stained glass windows each tell a story of the Bible.
“These windows were created over 800 years ago,” she said. “Most windows were created by artisan people. The Stations of the Cross area are hand carved into the wood—it surpasses time more than anything we can imagine.”
Maunder says that her classes would often just walked around the outside of Notre Dame. She reminds students that Notre Dame survived WWII and many other disasters through the ages.
“The stories through the windows will continue for another generation,” she said. “It’s a luxury we all have this to see—their (art) craft survived through time.”
According to news reports the rosace windows that date back to the 12th and 13th century had not been damaged by the fire.
“During the fire I was glued to the TV,” she said. “The Stations of Cross are carved in wood, I was surprise how will preserved it still was after the fire. But, to me it was the ceiling, and art work in the middle of the cathedral (that was damaged). The cathedral will have that same feeling—it looks (the same) as it did when I was there but now it’s well lighted. There is plenty left there to restore.”
Manuder was impressed firefighters and others went inside the burning cathedral to rescued what they could.
“To the French, Notre Dame is not just a religion thing, rather it’s history,” she said. “The French own the building—it’s goes way beyond Catholicism. It’s a working Catholic Church—it’s for the people of Paris. You can look at all the other works of art in Paris museums but, here is a work of art created by local everyday people who did not get to put their signature at the bottom (of the art) because there were so many laborers that put their hearts in creating this church hundreds of years ago. And that is worth saving.”