By Shelby Stewart-Soldan
Staff Writer
Ortonville — From wildflowers to the village Christmas tree to just open space, the Heritage Park near 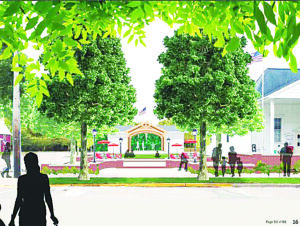 the village center has taken on a variety of looks over the last century.
But soon the old park may have a new purpose.
During the regular Monday night meeting, the village council voted to adopt the Heritage Park design report. The report was given by Ron Campbell, Main Street Oakland County Architect.
The design for Heritage Park was created after the Heritage Park subcommittee collected survey data from residents.
“Ron (Campbell) took all the survey information that we had for the community that we had mailed or that was online, and the wants of the community and the desires and what they’d like to see, and designed a space with all those assets and ideas in mind from residents,” said Melanie Nivelt, council member and Heritage Park subcommittee member.
According to the survey results, 90 percent of the respondents wanted a social gathering, 80 percent wanted space for additional activities such as pop-up shops or holiday markets, and 68 percent wanted year-round use.
The elements that the respondents wanted were benches for seating, lighting, flower boxes, tables and chairs, a gazebo, warming stations, bike rack as well as other elements that were incorporated in the design. While some costs were discussed, the project would be done in phases and the presentation has grants and fundraising ideas to keep costs to the village lower.
“The whole area that we’re sitting and standing in now, tells a story,” said Campbell. “Amos Orton, he had vision in his mind. Nobody ever built on this land next door. And in my mind, we’re uncovering this now, is ‘what did he have in mind?’ This was going to be the center of downtown, and I think there’s a story to be told here. So that’s why we think this building (Old Town Hall) and that park, joined together, really can tell this story.”
The council did not approve any funding last night, but by approving the design report, agreed that the subcommittee is on the right track. The design report featured a brick fence, tables with umbrellas and chairs for seating, a pavilion with a stage, lighting and plants.