By David Fleet
Editor
Michigan’s newest state park located in Holly and Groveland townships may soon be called The Mines of Oakland. 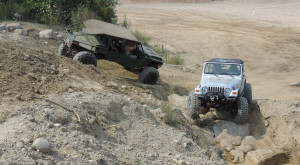 In the spirit of the property’s history and its unique plan for legal public off-road vehicle recreation, the local municipalities and their representatives agreed on the name following a request by Michigan Department of Natural Resources. Officials asked the public to submit ideas for naming the park, which will be located in a former sand and gravel mining operation in Groveland and Holly townships off I-75 at Grange Hall Road and Dixie Highway.
The property upon which the park is built, consists of former and active sand and gravel mines; mining is slated to continue after the opening of the park until 2023.
On April 2, the Oakland County Board of Commissioners OK’d a 20-year operating agreement, with a 10-year additional option, with the Michigan Department of Natural Resources.

Under the agreement, the Oakland County Parks and Recreation Commission will operate the ORV Park, located in Groveland and Holly townships, in partnership with the MDNR.
The current plan, for Oakland County’s 14th park is to finalize design by this fall, complete any construction in the spring of 2020 and have the park open by July 2020.
Locally, Bob DePalma, Groveland Township supervisor, Colin Walls, Springfield Township supervisor, Robert Hoffman, 2nd District Oakland County board of commissioners, Toni Brinker, Holly Township Parks director and Jerry Walker, Village of Holly manager have agreed to the name.
The ORV park incorporates 235 acres on property once mined for gravel. The MDNR reported in December 2014 a grant for $2.9 million was approved from the Michigan Natural Resources Trust Fund to purchase the property, however, only a portion of the grant was used so far. Currently, about 145 acres of the 235 will be included in the first phase of the ORV park. Some of the remaining acreage is still mined by area companies.
In naming the park, the group believes “The Mines” would easily become as notable as other Michigan locations like, “The Joe,” “The Dunes,” and “The Palace.” The divisive and descriptive name will set this location apart from the other Oakland County Park “Oaks” locations that focus on various types of recreation like trails, boating, swimming and camping or picnics. They group also say, when residents think of the new ORV park, they will think of a recreation area completely different than any other in Oakland County. They believe the name should be as unique as the space itself.
The park will be open to all types of ORVs, including full-size vehicles, side-by-sides, all-terrain vehicles or ATVs, and motorcycles. Staff from both MDNR and OCPR have been working for the past few years on a plan for how to incorporate something for everyone at the park.