Norris-Marcus, Peggy of Ontonagon, formally of Ortonville,  Age 71, died March 23, 2021 after a struggle with cancer. 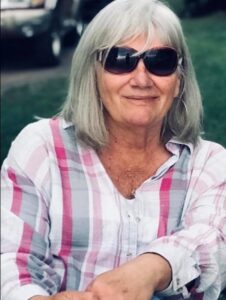 Peggy was born February 28, 1950 in Detroit, the daughter of Manuel and Jane Marcus.  She attended Redford High School.  Peggy had a strong sense of community and enjoyed serving others in Ontonagon.  Peggy was involved in the St. Nicholas Project for over two decades; helping to ensure that every family had food and every child received a gift at Christmas.  Peggy also donated her time to her local food pantry.  Peggy assisted with preparing and distributing meals through the Little Brothers Program. In addition, Peggy enjoyed planning and attending classroom parties and fieldtrips with local students through the GOISD.

Besides helping others, Peggy enjoyed spending time with family, especially at Thanksgiving.  She also enjoyed gardening, going to the casino, pet-sitting Sam, and bonfires on the lakeshore.

A celebration of life will be held this summer on the shore of Lake Superior.  If you are so moved, donations can be made to the St. Nicholas Project of Ontonagon or the Ontonagon Cancer Society. Peggy will be greatly missed.