By Shelby Stewart
Staff Writer
Both Harvey-Swanson and Oakwood Elementary schools chose to put on the classic play Peter Pan as their drama performance this year. 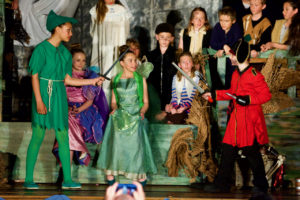 On June 1, Harvey-Swanson had two performances of the play, and Oakwood had both of their performances on May 31 and June 1 at the Performing Arts Center at Brandon High School.
“This was more than just memorizing lines and performing,” said Harvey-Swanson director Peggy Miller-Zelinko. “Students learned to work as a team. Students worked hard during after-school practices and lunch time and went away ‘flying’ as they should in Peter Pan.”
The Harvey-Swanson production was 30 students from their fifth grade drama club.
“It was a privilege working with Ms. Miller-Zelinko and the drama club this year,” said Harvey-Swanson Principal Debbie Brauher. “I am so proud of the students’ teamwork, dedication and courage.”
The Oakwood performance consisted of 2nd-5th grade students, and was directed and produced by a group of Brandon Middle School 7th graders, and was Oakwood’s first ever production.
“Some of the 7th grade drama students wanted to be sure that Oakwood students had an opportunity to perform in a play like they got to experience when they performed in the middle school production of Willy Wonka Jr. earlier in the school year,” said Oakwood Principal Coy Stewart.
“Kayla DePalma, Abby Rowe, Brenna Sans and Olivia Wills, supervised by Oakwood staff member Shelly Schantz, worked hard to run auditions, select the cast, run rehearsals, choose costumes, prepare a crew and backdrops, and all of the other tasks that go along with putting on a play production.”