By David Fleet
Editor
Atlas Twp.-Ray Porter never met his grandfather, but the legacy he left him is still growing strong today. 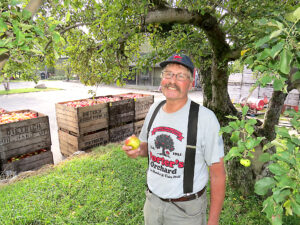 On Oct. 1, Porter’s Orchard and Farm Market, 12060 Hegel Road, Goodrich will celebrate 100 years of providing the community with apples and a host of products from award winning cider to doughnuts to fresh honey. At 6:30 p.m., Oct. 1, the community is invited to celebrate with the family owned orchard with cake, frozen custard and music by Carry on, a Crosby, Stills, Nash & Young tribute band.
“My grandfather, Raymond, started the orchard in 1921 and my father Roger, grew up picking apples and working on the farm,” said Ray. “Dad took over after he was out of the Navy while he was studying horticulture at Iowa State University.”
In 1949 Raymond was on his way out to see his son, Roger who was at college in Iowa when he passed away at his aunt’s home in the Chicago area.
“Dad then quit school and since he was studying horticulture came home to be an apple farmer,” said Ray.
In 1921 the farm was 64 acres and grew to 140 acres at one time, but today it’s 75 acres, about 30 of the original acres purchased.
“When my grandfather purchased the property it was an existing farm,” he said. “Grandpa went out and purchased the trees, and it took about 10 years before the first apples were harvested. Actually, sour cherries were the first crop that he sold you-pick.”
Raymond and Rodger would pick apples and sell them door-to-door in Flint.
“When my dad was little he went up to people’s doors and sold apples,” laughed Ray.
In the 1930s Raymond dug the pit for the rack-in-claw cider press. The same type of press that’s used in the production of cider today.
“It’s a lot of work to make cider,” he said. “But people love it.”
Regardless of the mix or method Porter’s cider impressed the taste buds and was chosen second place from a field of 30 entries during Michigan’s Annual Apple Cider Contest in 2008, during the Great Lakes Fruit, Vegetable and Farm Market Expo in Grand Rapids.

About 2000 Ray stepped in and managed the farm. Rodger passed away in 2005.
“I always liked working with my dad and working at the farm,” said Ray, a 1975 Goodrich High School graduate. “Being part of the legacy makes it all worthwhile. If I’m nothing, I’m determined. I still love this job and would not have it any other way. I’ve never known anything else. It’s a crazy way to make a living all in two months. You really need to hustle and get everything you can.”
“The weather just kind of happens,” he said. “I know God’s going to take care of me. I know that somehow it’s going to work out, it always has. He has not let me down yet.”
“The biggest downfall is when you don’t have any apples and you tell people that,” he said. “Then you get lousy in the fall and people don’t come out. The up is when you see people happy and love cider. And say thank you for what you do.”
Today it’s not just about the size of the apple crop, he said.
“It’s all about getting people out here in the fall, and the experience, that all changed in the 1970s, when dad put an addition to the building on.”
Back then people would park along Hegel Road and get their cider and donuts, then leave.
“So he added a parking lot and picnic tables,” he said. “People started wanting hay rides.”
Today the century-old farm remains with a variety of fall-themed activities alongside award winning apple cider. Porter’s Orchard Farm Market & Cider Mill can be found at the Davison, Flint, Grand Blanc and Clarkston farmers markets.