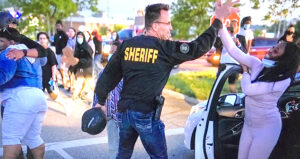 “If we are going to seek change it must be from the top of law enforcement,” said Chris Swanson, Genesee County interim sheriff. “We forget the higher we go in our offices, the more we need to be in the community taking care of the most basic needs—going to the people one-on-one. Those inroads we make have to be so deep that when something so outrageous (like) that which happened in Minneapolis happens again, and I pray it does not—those connections you made in the sunshine are going to be vital in the storm.”
Swanson, a former Atlas Township resident and Goodrich Schools student responded to The Citizen following a protest in Flint Township on Saturday sparked by the May 25 death of George Floyd. According to news sources, a Minneapolis police officer knelt on Floyd’s neck for several minutes while he was handcuffed on the ground, crying that he couldn’t breathe and pleading for help.

The incident has provoked outrage, sparking protests and violence throughout the U.S., including the Genesee County area. Bystanders, who begged 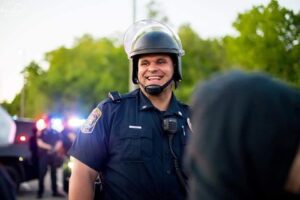 officers on the scene to intervene, recorded Floyd’s death on video and shared the images on social media. After that went viral, Floyd’s death started a week of protests in most major U.S. cities. Officer Derek Chavin, was fired from his job and has since been arrested and charged with second-degree murder. The three other officers were also charged.
On May 30, Swanson along with some of the Flint Township Police department, including Ortonville resident Officer Sean Poole were at a protest between Miller and Linden roads. Swanson along with Poole interacted and responded to some of the hundreds of protesters during the event.
“We want to be with ya’ll for real,” said Swanson. “So, I took off the helmet and laid the baton down, I want to make this a parade, not a protest. I did not plan for it, I did not have a strategy, I looked over to my right and saw Det. Chad Miller from Flint Township and officer Sean Poole also from Flint Township react to the crowd in a positive way with a fist pump and a hug. I saw the line break just a fraction. I said, ‘that’s it— the helmets gone.’ We walked another mile and a half, we shook hands, hugged and talked. You saw this whole tension just dissipate. Law enforcement has to come out from behind a desk or a conference table or a podium and talk.”
In the crowd Swanson found a Flint street pastor and a lead protest organizer then gave them both a hug.
“Man we are with you,” he said. “What that guy did (in Minneapolis) was not one of us. These cops here love you and they will protect you.”
Since the protest on Saturday, worldwide media documented Swanson’s actions along with those of the Flint Township Police.
On Saturday Officer Poole was one of about 40 officers called in as a precautionary measure to the Miller Road protest set for later in the day. Poole is a 37 year old Flint native and Flint Central High School graduate. The Ortonville resident is a former Flint Firefighter, a nine and a half year veteran of the Genesee County Sheriff Department. He served since January 2019 with the Flint Township Police Department.
“It was a fluid situation and the (police) staff was preparing,” said Poole. “We did not know what to expect—peaceful or violent. One of big concerns was the traffic on Miller Road it’s a factor in how we planned our response.”
The protest was set to begin about 6 p.m.
“We had seen that other cities had erupted and they were on high alert due to the violence,” he said. “At the same time we maintained some poise. We respected their right to peaceably protest. It’s such a foreign type of situation, it’s not something we deal with as law enforcement on a daily basis. It’s kind of a curve ball.”
“They were all mostly peaceful,” said Poole. “No violence. They just wanted change and many were chanting, ‘George Floyd’ and ‘I can’t breathe’ as they walked along. Nothing was directed at us, we were there to mitigate the traffic, as an escort. The crowed grew quickly over a short period of time. I did not observe any racial tensions, rather everyone was getting along. We were face-to-face with the protesters, there was hugs shared and fist pumps. So far we are leading the way in keeping the peace. It’s nice press for Flint.”
Like Poole—Sheriff Swanson saw joy, relief in the eyes of the protesters.
“I have not had one person say it was the worst decision you could make or say it was a dangerous decision because you can’t argue with results,” said Swanson. “Whatever it takes to get change. That happened on Saturday and (since then) we’ve had protests (in Genesee County) on each night after that. Not one arrest, not one fire and not one injury. Those protesters on that Saturday made a statement throughout the world that we are the beacon of light of how to protest and how to make change without violence. That was the narrative that was needed for years in Flint Michigan and they did it that night.”
Now Flint pride is restored, added Swanson.
“No one wants to go backward, we want to show what was wrong was wrong, we want our voices heard and the way it was suppose to be done. We are peaceful protesters with a loud voice—listen to us.”
The George Floyd death will change American policing forever, added Swanson.
“It’s because we hit a boiling point and the whole world saw it over the last few days,” he said. “Anyone who was born after the riots in Detroit or that did not see the riots in LA saw something this past week that was historic. It was sad. If we don’t change, and that change starts with law enforcement we are going to have this conversation again. There are 800,000 cops in the United States and I have total faith that legislation, response to discipline, response to troubled officers, vetting of officers, community relations have taken on a new tone. We have to start.”