By David Fleet
Editor
Brandon Twp. — Purple Heart Day, Aug. 7 is a day for Americans to remember and honor the men and 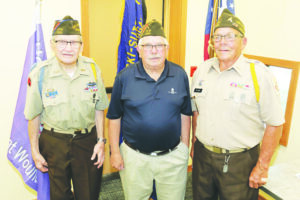 women who served their country and were wounded or killed.
On Monday, community members gathered at the Brandon Township Library to reflect and honor those awarded the Purple Heart.
The Citizen newspaper had the privilege of interviewing three area Purple Heart recipients who attended the event on Monday.
Veteran Don Kengerski, now 91-years-old, entered the U.S. Army in March 1951 and served in combat in the North Korean countryside as a 21-year-old machine-gunner in M-Company, 32nd infantry regiment, of the 7th Infantry Division. He received 38 pieces of shrapnel in an August 1952 skirmish, but continued his duty in North Korea.
Kengerski returned to the United States and was discharged on March 5, 1954. Kengerski received the Purple Heart and Silver Star medals. He was VFW Post 582 commander for 19 years before stepping down in 2013.
Brandon Township resident Duane Getzmeyer, now 71, was also a past VFW commander.
Getzmeyer, a Pontiac native, 1969 Waterford High School graduate who received his diploma in June, his draft notice in July and was in the Army by August.
“I was in the infantry school at Fort Benning Georgia, they called it ‘Benning School of wayward boys,’” he said. “A year-old after I graduated from high school I was jumping out of helicopters.”
In June of 1970 Getzmeyer flew out of Fort Lewis, Washington to Anchorage, Ala. to Kyoto, Japan.
“We landed in Cam Ranh Bay Vietnam,” he said. “I asked for 101st Airborne and I was sent to the 196th Light Infantry Brigade.”
Getzmeyer was sent to Hawk Hill between Danang and Chu Lai.
“I had walked the point that morning,” recalled Getzmeyer. “Someone went through the bushes and tripped a bobby trap, four of us were wounded.”
Getzmeyer was hit by shrapnel in his chest, side and hand.
“At the time I was more concerned with a buddy of mine who was wounded in the ankle,” he said. “That was in October and he was killed the following March.”
The helicopter would not land at site of the fight so his sergeant picked him up by the shirt and put him onboard.
“I had two surgeries and I never went back to the field again,” he said. “I have used 80 percent of my hand today. They did a really good job of caring for me.”
Getzmeyer arrived home on Mother’s Day 1971. He would earn three college degrees on the GI bill.
Township resident Ron Allen served in Vietnam.
Allen, an Ortonville native and 1965 Ortonville High School graduate, now 75, enlisted in the Army in March 1966.
He served as an E-1 gunner on a M-48 Patton tank. Allen was hit twice and received two Purple Hearts. The first wound was from a rocket-propelled grenade—he received shrapnel to his arm and left shoulder. He was treated at an area base and returned to his unit. The second time he was hit was in May 1968. While inside his tank Allen recalled he was loading a 90 mm shell when an enemy mortar came in from the top of the vehicle. The hatch was open at the time and he was talking with a fellow soldier when the attack occurred. Allen received severe injuries to his head and back.
“The guy I was talking to was killed instantly,” he said. “It’s like you fell down and hurt your head—that ringing sound. The other guys in my unit reached down and pulled me up out of the tank and laid me on the ground. My back hurt, my head hurt—you’re numb from it at first. Then I heard the helicopter come and they took me to Da Nang hospital. It’s been 50 years or so—I just try not to think about it.”
Allen was in Vietnam for eight months. He returned home in March 1969