By David Fleet
Editor
On Aug. 29 a “push-in” ceremony upholding a tradition dating back to before motorized fire apparatus was conducted at Brandon Fire Station 2. 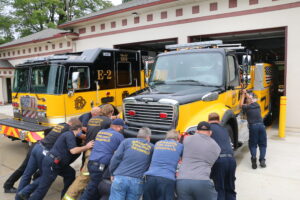 Brandon firefighters pushed in two new emergency response vehicles, a fire engine and a tanker recently purchased to replace two older vehicles. The new vehicles cost just over $1 million.
The “push-in” ceremony dates back more than 100 years to a time before fire trucks were motorized and operated with horse drawn equipment. In those days, firefighters had to actually push their trucks into the station after a call.
The ceremony actually includes pushing-in three times, for God, county and the fire station, says Brandon Fire Chief David Kwapis.
“One push-in is enough,” he said.
Kwapis steered while Brandon Township Supervisor Kathy Thurman was in the front seat of the new truck.
The new trucks include a variety of new features including 360 degree cameras, providing visibility for the driver completely around the vehicle. The fire engine also has a 10-foot extendable over-head light, which will allow firefighters to see better on night-time calls.