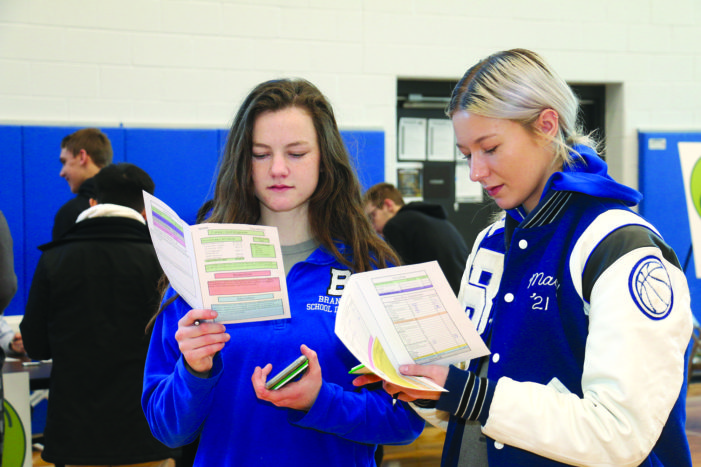 By Shelby Stewart
Staff Writer
Curtis Martin just wants to be able to afford rent and a pug on a radio host’s salary.
On Feb. 14, Brandon High School Juniors participated in Reality Awareness day, a program hosted by Michigan State University Financial Credit Union. For the program, students chose a career and received a booklet with their annual income broken down into monthly take-home pay after taxes. With that, they had the goal of building their savings every month and affording various bills and one time expenses.
“It’s interesting how everything sort of comes together,” said Martin. “You learn what really matters.”
Various booths were set up around the gym with expenses for everything from housing to clothing to groceries to technology. It was even noted on the booklets what ‘restrictions’ their profession has, such as needing to buy business casual clothing, needing to buy a laptop, or if their profession requires a college degree and how much a student loan payment each month would be.
“They go through the booths, buy a house, in reality they can’t do all the things they want to do in life,” said BHS Principal Dan Stevens. “It’s really been eye opening for the kids.”
The students were also given calculators to figure out monthly expenses for themselves, including rent or mortgage, an auto loan payment, entertainment or lifestyle expenses and even charitable donations.
“I didn’t know what to expect, but they really liked it,” said Stevens. “One kid said he has a new appreciate for his parents because he didn’t realize how much everything costs.”
Most of the people running each booth were brought in by MSUFCU, though some were local community members that work at or own businesses in Ortonville.
“It’s important to give them a small glimpse at budgeting in the real world,” said Catherine Hurth, a representative with MSUFCU. “We’ve heard ‘I had no idea how much these things cost.’ The goal is to build savings and live within their means.”
While this is the first time MSUFCU brought this program to Brandon, and Oakland County, this program has been done in schools around the Lansing area.
But Martin hasn’t changed his mind about his profession, and is hoping to make his salary work for his lifestyle.
“I’ve always been interested in voice acting and stuff,” he said.