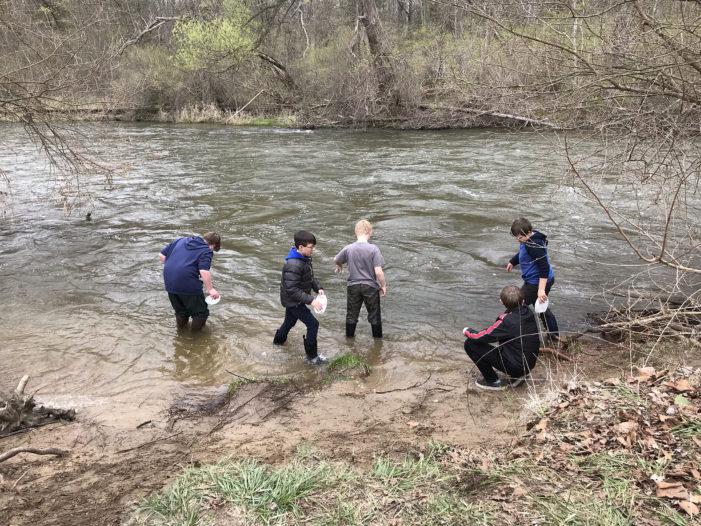 “Each kid got to release one,” said Peggy Miller-Zelinko, who teaches fifth grade science at Harvey Swanson Elementary. “They were put in a little cup, and we put an aerator on, and then they each went down to the river and put them in.”
Funded by the Ortonville Rotary club, in November, her class gets eggs from the Department of Natural Resources (DNR) as part of their Salmon in the Classroom program, and the students help raise the fish until they can be released into the wild.
“I would never not do it,” said Miller-Zelinko. “It just adds and adds, and I learn more and more and as I learn more, I can give them (the students) more stuff. There’s so much that you can keep learning.”
Daily her students would check what they called the stats in the tank, checking the pH levels, nitrate levels, ammonia levels and more.
“I think that they have more of an appreciation for Michigan,” she said. “Michigan waters, Michigan resources.”
The students all said that raising the salmon was not easy, but that they enjoyed the process and were sad to see the salmon go.
“Many states around the country have TIC (Trout in the Classroom) or SIC (salmon in the Classroom) programs,” said Tracy Page, the aquatic education coordinator for the DNR. “Michigan’s introduction of Pacific salmon in the 1960s provided a unique opportunity for the DNR to start a similar program, and showcase a species that grows well, are hardy, and aligns with the school year. Chinook salmon provide an excellent example for classrooms to explore concepts like introduced versus invasive species, life cycles, Great Lakes ecology and more.”
The Salmon in the Classroom program has been around since the late 1990s, starting with a few schools in northern Michigan. For the 2019-2020 school year, about 300 teachers will be participating in the program state wide.
“There are rare opportunities for students to connect so readily to a Great Lakes species,” said Page. “Through SIC, raising Chinook salmon from eyed eggs in November, through to smolt in the spring allows the students to build a connection with a charismatic species, ultimately creating a stewardship ethic for our natural resources.”