By Shelby Stewart
Staff Writer
In a little over a week’s time, Ortonville and Brandon Township have been turned pink in support for Addi Goff. Addi was diagnosed with an

astrocytoma, which is a type of cancer of the brain.
At about 8:30 a.m., May 9, Addi died.
She was 9.
The communty rallied behind Addi, a Havey Swanson fourth grade student, with fundraisers, vigils and prayers. Prior to her death her mother Ashley Goff shared her story.
“She was complaining of headaches,” said Ashley. After taking Addi to the doctor, they sent them down to Children’s Hospital for an MRI for the pressure they found behind her eye. “They told us the MRI would take an hour, hour and a half. Within 20 minutes they called us down because they found a tumor.”
The doctors gave the family the option of next day surgery or waiting until the following Monday, on April 30. Ashley and Chuck decided to wait until Monday to have her tumor removed, and they said the surgery went great.
“She was talking, she thought we would be going home in a couple of days,” said Ashley. “The next morning she started having seizures.”
Overnight, Addi’s levels skyrocketed, and couldn’t be brought down. The doctors found no brain activity.
“Luckily we had the weekend with her and the whole day she was admitted,” she said. “She was so amazed that people were sending her flowers and 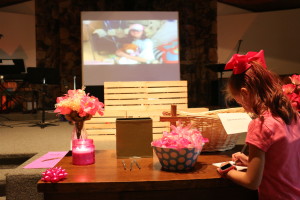 all of these people know her.”
There is a GofundMe page for the Goff family, and within two weeks, over $23,000 has been raised for them to handle medical expenses and household bills, since both parents have not been working while Addi has been in the hospital.
“It really just blows my mind,” she said. “I would give it all back in a second for her, but we obviously haven’t been working, we’re going to need that going forward.”
A friend of Ashley’s reached out and told her she found Addi’s diary at her house, and Addi had written in it three days before she had been admitted to the hospital. The entry reads, “Today was just like any other day in Ortonville or was it. Little did they know a new superhero was coming to town.”
“She just didn’t realize at the time but she is that superhero,” said Ashley. “The way she’s brought so many people together and made everyone think twice is something that is so her.”
Addi leaves behind her parents and two younger sisters, Kamryn and Aria. Donations to the family can be made at www.gofundme.com/addit4addi. From 4-8 p.m., May 14, Tropical Smoothie, 1152 S. Ortonville Road, will host a fundraiser with 30 percent of every bill donated to the Goff family. May 17, 5-8 p.m., Leo’s Coney Island in Lake Orion will be donating 10 percent of their sales to the families, and servers will be donating all of their tips.