By David Fleet
Editor
Ortonville-Mark Bell and Joe D’Anna were having trouble finding work in 1991. That’s when Mark was asked by a friend if he wanted to manage a 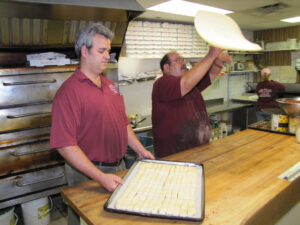 struggling pizza store in Ortonville, then known as Papa John’s Pizza, 425 Mill St. recalls Mark.
“The job market was bad right then and we both were spinning our wheels trying to establish a career,” recalls Mark. “It was Joe who suggested we buy the place and the price was right.

Two weeks later we were in business. We opened on a Tuesday and made $37 that first day. Joe and I kept saying, ‘what did we get ourselves into?’ Ortonville had two pizzerias in town, so there was competition. We never dreamed we both could make a living off the store.”
About three months later business picked up and for the next 29 years Mark and Joe guided Papa Bella’s Pizza to an Ortonville icon and strong local business offering jobs to youth, community service and great food.
Joe D’Anna died on July 26 following a long illness.
He was 62.
“I spent more of my conscious hours with Joe then I did with my own family because of the business,” said Mark. “I’m sure we had our days but, both of us learned to accept each other for what we were and to respect each other. I really don’t remember in 29 years ever raising our voice to each other. It was like a marriage. We never let the business ruin our friendship. It also helped that the community took us in and supported us.”
“We valued our friendship more than the business,” he said. “Actually, there were many customers that thought we were brothers. I heard it so many times I just stopped telling people we were not.”
While Joe spent many hours at Papa Bella’s and in the community he was also a caring, husband and father to his sons Dominic and Joseph “Joey” D’Anna.
“He loved Ortonville,” said Karen D’Anna, his wife of more than 20 years. “He was just so generous and loved the kids—from sports to robotics he was always into what they were doing. Joe had a big personality and pizza was his calling card. When something was going on in the community whether a big fire or a funeral Joe would so many time supply the pizzas. He just did it and took care of the community—he was all about helping someone.”
“Pizza got Joe in the door,” laughed Karen. “We’d tell him, ‘Joe your jokes are so bad, they’re funny.”
Joe loved all the area youth that worked for Papa Bella’s over the years, recalls Karen.
“I’d often ask Joe when he came home from work, ‘how’s your other 20 kids doing?” she said. “I’d laugh when the kids that worked with Joe would say, ‘he acts grumpy but he was really a soft hearted guy.’”
Jessica Millmine was a student in the Brandon High Class of 2013.
“I was a senior in high school and I wanted some extra money so I walked into Papa Bella’s for a job,” said Jessica. “Joe interviewed my right there at the store when I went in and asked me a math question. He hired me and quickly I learned, that while rather gruff at times Joe was just a big Teddy Bear. Joe and I worked many lunchtimes together and I stayed at Papa Bella’s for five years. That’s how much I loved them.”
After high school Jessica attended college to peruse a nursing career.
“Joe and Mark both worked with my class schedule in anyway they could,” she said. “They are both amazing bosses. Joe would encouraged me and supported my career choice as a nurse. He would say how proud he was of me. I did not quit that job until I became a full time nurse. Mark and Joe had such a big impact on my life and made me the hard worker that I am today with a very strong work ethic. From working at that pizzeria I learned to talk to people and build relationships with the many customers that would stop by. The life lessons I learned from Joe I took and applied them to my job as a nurse today. That’s how much of an impact he had on me.”