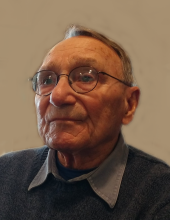 passed away on August 1, 2022 at Brian’s House in Essexville.
He served as principal of Howard T. Burt and Community Service Schools in
Ortonville. Upon retirement the Community Service Schools it was renamed
Harvey-Swanson Elementary School. While in Ortonville, he was a member of the
Rotary Club and was named Citizen of the Year in 1989. He is a past president of
Region 7 of the Michigan Elementary Principals Association. After retirement he
became a United Methodist Clergyman and served churches in Richfield, Otter
Lake and Fremont Avenue United Methodist Church in Bay City. Following
retirement from the active ministry, he served as an interim pastor for several
churches. He attends St. Luke’s United Methodist Church in Essexville. He was a
veteran of the US Army serving Korea.
Survivors include his wife, the former Ruth A. Buckstiegel, whom he married June
27, 1959. He also leaves his children: Jeffrey Wayne (Cora) Harvey, Douglas
Dale Harvey and Tem Noy, his grandchildren: Jeremy, Christina and Gavin
Harvey, two great grandchildren and several nieces and nephews. He was preceded
in death by his father Edward Harvey, his mother and step father Dorothy and
Wayne Doris, his brother Jim and sister Delores.
Visiting hours will be Tuesday from 4 to 8 p.m. at Penzien Steele Funeral Home.
The funeral service will be held on Wednesday at 11 a.m. at St. Luke’s United
Methodist Church, Essexville. Family will receive friends on Thursday from 2 to 5
p.m. and 6 to 8 p.m. at VILLAGE FUNERAL HOME 135 South Street,
Ortonville, MI. Funeral service will be held on Friday, August 5, 2022 at 11 a.m.
at the Ortonville United Methodist Church (93 Church St., Ortonville, MI) with
visitation beginning at 10:00 a.m. Burial will follow at Ortonville Cemetery with
military honors under the auspices of the U.S. Army and the Ortonville VFW Post
#582. Memorial contributions may be made to the Alzheimer’s Association.
Envelopes are available at the funeral home.