By David Fleet
Editor
Atlas Twp.-On March 16, the township board of trustees voted 5-0 to accept the resignation of Captain Rob Cummins. 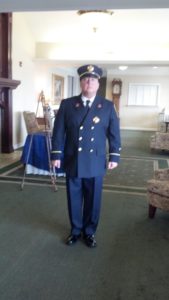 “Rob was an asset to the department,” said Tere Onica, township supervisor. “The first responders (like Cummins) are truly dedicated, they go are out there in all types of weather, heat, cold many time in the middle of the night, when they have full-time jobs and families. They miss birthday parties and special events in order to be our first responders here. There’s not enough of them to go around, so it’s with regrets we accept his resignation.”
Cummins joined the township fire department in September 2006. In 2012 he was promoted to Lieutenant and then Captain in 2018.
“Rob was a good leader who set great example for other firefighters,” said Assistant Fire Chief Ed Klimek. “He worked hard on the fire ground and mentored younger firefighters at the station. He will be missed, but we wish him well in his retirement.”
A Hazel Park native and 1990 Hazel Park graduate, Cummins attended and completed studies at the Fire Training Institute at Oakland Community College. He also was certified by the State of Michigan as a captain and as an Emergency Medical Technician.
Cumminis began his career at the Hazel Park Fire Department in 2003.
Cummins and family moved to Atlas Township and in 2006 became Fire Chief Fred Forys’ first hire.
“I could not be more proud to be a part of the Atlas Township Fire Department,” said Cummins. “When I walk into a restaurant or store in our community they all know my name. It’s been my pleasure to help groom many young firefighters and to have served under outstanding leadership. From responding to personal injury accidents to pulling dogs out of lakes to massive structure fires its been quite an experience. I would not change that part of my life. The township has the very best people. It’s just my time to move on.”