By David Fleet
Editor
A former Blackhawk recently scored with a 24 second viral video that even made Good Morning America. 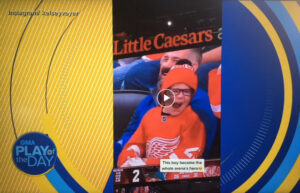 Kelsey Voyer, a 2018 Brandon High School graduate and current Ferris State University Senior attended the Detroit Red Wings vs San Jose Sharks game at Little Caeser’s Arena on Jan.4, and captured the exchange between an exuberant hockey crowd and a young man on the Jumbotron.
“It’s just a feel good video for everyone,” said Voyer. “The boy in the video had been shown on the Jumbotron many times throughout the night. The smile this boy had on his face every time he was shown was very heartwarming to everyone, so we all started cheering! They started showing the opposing teams’ fans in between showing the kid. It became a thing to cheer for the boy and to boo the other teams’ fans. I happened to record at the perfect time and captured it happening.”
Millions agree.
Once the video was posted to TikTok, SportsCenter, NBC, E! and Good Morning America contacted Voyer for permission to use the clip. The online views exceeded 4 million.
The boy’s name is Alex and he has a YouTube channel called “aphockey.”
The video was a winner as was Detroit led by Tyler Bertuzzi and Pius Suter who each scored twice and Detroit topped the Sharks 6-2.