Seussical the Musical at BHS

By Shelby Stewart
Staff Writer
At Brandon High School, the stage is set for Seussical the Musical. 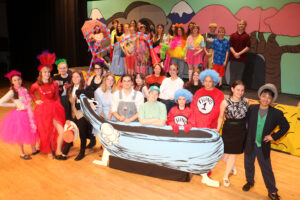 The musical is an adaptation of various Dr. Seuss books, including ‘Horton Hears a Who,’ ‘Gertrude McFuzz,’ and ‘Horton Hatches the Egg.’ At BHS, it stars Jesse McClennen as the narrator The Cat in the Hat, Nolan Thornton as Horton, Piper McKenna as Jojo, the smallest of the Whos, Madison Elnicky as Gertrude, Emelia Hughey as Mayzie, Taylor Salter as the Sour Kangaroo, and Dillan Lor Voe and Abigail Rowe as Mr. and Mrs. Mayor.
“I’m familiar with the show, and since this is my first time being musical director, I thought it would fit really well,” said director David Bremer. “With the cast and ability we have, it was the best fit.”
The cast is comprised of both middle and high school students at Brandon, and tells the story of Horton trying to save Whoville, which exists as a speck of dust on a clover. He is mocked by other residents in the Jungle of Nool for thinking that there are people on that speck, and together with the Whos he has to prove that they are real to save their planet and Whoville.
“I love seeing the students enjoy themselves and come into their own,” said Bremer. “Some of these are students who have been virtual and haven’t been able to express themselves in this way, and it’s just such a joy to see them be themselves.”
Visit Whoville and The Jungle of Nool on May 13-14 at 7 p.m. at BHS, 1025 S. Ortonville Road, Ortonville, and on May 15 at 2 p.m. Tickets are $5 at the door.