By Shelby Stewart
Staff Writer
Brandon Twp. The Oakland County Crash Reconstruction Unit is assisting deputies from the township substation with the investigation of a single 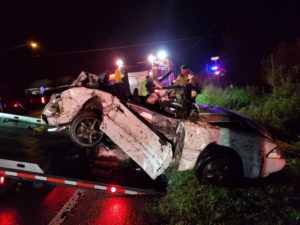 motor vehicle fatal crash. The crash occurred on Sept. 29 at 4:25 p.m. on Seymour Lake Road at the intersection of Perry Lake Road.
A 65-year-old Oxford man was driving a 1992 Ford Mustang east on Seymour Lake Road. Witnesses said he attempted to pass at least two vehicles on the wet roadway and lost control. The vehicle went off the roadway to the left, jumped the curb and went down into a marshy area before overturning and coming to a rest on the left side. The driver, who was not wearing a seat belt, was ejected and the vehicle partially landed on top of him.
Brandon fire responded and gave medical treatment, but the victim was pronounced dead at the scene. The vehicle airbags were deployed, and it is believed that alcohol may have been a factor, but the crash remains under investigation.