Sharing their secrets of love: Atlas couple together for 69 years

By David Fleet
Editor
Atlas-From the rural coal mining areas of West Virginia to Atlas— an area couple on the cusp of nearly seven decades of marriage say, “it’s OK to 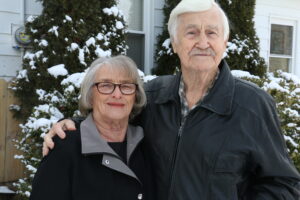 disagree with each other, but do it agreeably.”
Through the window of a school bus on a rural West Virginia road, Melba Harvey then a ninth grade student, noticed Melvin Sneed walking along the road.
“I liked the looks of him,” said Melba, 85 recalling the 1940s and growing up on Maxwill Hill, WV. “I asked the girl sitting next to me on the bus, ‘Do you know who that boy is?’ She had no idea. So when I arrived at school I asked my best friend to find out for me—turned out it was her uncle.”
Melba, was about 14 years old at the time and eventually became friends with Melvin then 19 year old.
Melvin also just happened to be good friends with a boy Melba was dating.
“Melvin would bring his friend over to visit me,” she said. “We broke up but I stayed good friends with Melvin.”
Melvin was a resident of Flat Top, WV located about five miles away.
“I attended a two-room school house,” said Melvin, now 90 years old.

“But we only used one room. I started first grade at five years old since we did not have a kindergarten. I also skipped a grade then graduated high 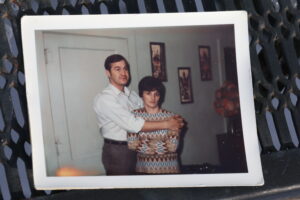 school early at just 16 years old. I attended Spanishville High School with an enrollment of about 27.”
In 1950 Melvin enlisted in the Air Force at the start of the Korean War.
“I stayed in the states,” he said. “Melba and I wrote to each other but were not dating. She wrote and asked me to bring a good looking man home with me. I responded with, ‘will I do?’”
Melba wrote back and said, “yes you will.”
Melvin did not go overseas to Korea and was discharged from the Air Force due to a family hardship.
“I came home and worked to help my parents out,” he said.
When he got out of the service in November of 1951, the two dated. The couple were married in Beaver, WV on March 8, 1952—at the area pastor’s home.
Melba was 16 and Melvin 21 years-old.
They moved to Michigan 1956, and Melvin retired from General Motors Grand Blanc in 1987.
Next month the couple will celebrate 69 years of marriage.
“He’s a special man,” said Melba. “We’ve always gotten along, we’ve have disagreements but we work it out. We’ve always had a good marriage—he’s a fantastic husband, I could not have found anyone better—I’m blessed by the Lord,”
Melvin agrees.
“We’ve had great children and have a very good family,” he said. “Melba and I like a lot of the same things—we watch Jeopardy each night together. My advice to couples today, don’t think you’re the boss and share responsibility for everything. Don’t be bossy in a Christian way.”
The couple have three children Dale, Steve and Sue. They also have six grand children and seven great grand children.