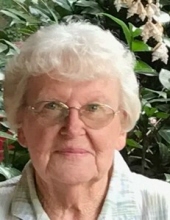 She was born in Benzonia, Michigan, on October 11, 1929 (92 years ago), to the late Albert Ruple and Ruth Ruple Matteson. She married Glennden R. Pletcher on September 11, 1948, in Ortonville, Michigan. She is survived by her daughter, Cindy (Roger) Seelbinder, her son, Brian (Ann) Pletcher, 8 grandchildren, and 12 great-grandchildren, an honorary daughter, Karen (Rod) Mersino, one brother-in-law, Bob Ames, two sisters-in-law, Marlene and Judy Pletcher, and many nieces and nephews. She was preceded in death by her loving husband, her son, Brent Pletcher and two sisters, Carol Lindahl and Phyllis Saunders. Shirley graduated from Ortonville High School. She worked at Pontiac Motors for several years. With her husband, she owned and operated Village Dry Goods in Ortonville for many years where she was a strong supporter of local school and community activities. She was a member of the Ortonville United Methodist Church and the Eastern Stars. She was loved very much and will be greatly missed. A private memorial service will be held at a later date. Memorial contributions may be made to the charity of one’s choice. On-line condolences may be expressed at www.crowellbrothers.com. Arrangements entrusted to Crowell Brothers Funeral Homes & Crematory, 201 Morningside Dr., Buford, GA 30518. 770-945-9999