By David Fleet
Editor
Brandon Twp.-Vibrant red sunsets and a glowing moon will be the rule for the next few weeks as smoke traveling from massive Western wildfires is 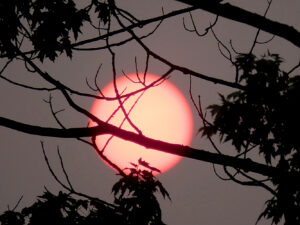 stretching all across the United States including Southeastern Michigan.
“Until the fires out west are snuffed out, we will continue to have days, or stretches of days that will be very hazy,” said JR Kirtek, the chief meteorologist for ABC Channel 12 News Flint. With more than 36 years experience, Kirtek said such wind patterns creating drifting smoke are not new.
“Wednesday –was much hazier than Tuesday,” he said. “It all depends on where our weather systems come from. If we get a cool front from the north, our skies will become bluer for a few day.”
At night, the smoke has resulted in some pretty spectacular views of a very red moon,” he said.
“Most of the smoke is at high altitude, which is why we don’t smell it,” said Kirtek. “Depending on the wind and other weather conditions, it can mix down to the surface. This will result in dirty rain, and occasionally, poor air quality.”

As of Thursday, seven new large fires were reported Sunday, bringing the total number of wildfires raging in the United States to 91, according to the National Interagency Fire Center.
More than 1.8 million acres have burned since these fires began, the NIFC said.